Well, this one will go down as a record breaker and not one of my better outings. But I will get to all that later. First up is the Saturday shenanigans in Sabula, Iowa. 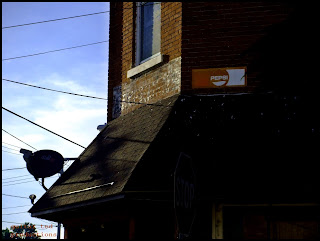 I left Waterloo at a little past 2:00pm on a gray, rainy afternoon. Eastward the rain would stop. I came out into clear blue skies and road construction. Hrrrumph!

The road did not have a detour posted, and I took to gravel to find a work-around, but ended up getting lost and then not lost which ate up a bunch of time. The route found once more, I was on my way. However; it was all two lane highway from thereon out, which means lots of small towns to slow down for as well. It was approaching 5pm when the cell phone sprang to life.....

I was to be sharing a motel room with three guys from Madison, Wisconsin, who were also driving down for GTDRI. It was Grant who called me, and he asked if I was planning on eating, and did I want to join them for pizza at Bombfire in Sabula, Iowa? I acknowledged that I did want to do that, and arrangements were made then to meet there as soon as I pulled into the river town.

"River Town" in and along the Mississippi River means that, (at least down Iowa's portion), the town is usually older, run down, and has a certain feel to it that other Iowa cities will not have. However; Sabula is not an "ordinary" river town. It is on an island in the Mississippi, actually. When Grant told me they had pulled up in front of Bombfire, he desribed it by saying, "It's.....uhh.....interesting." 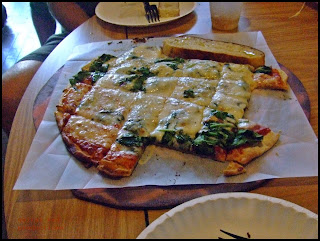 I met up with Michael, Todd, and Grant at Bombfire and we ordered up some really good grub, ate it, and petted the dog. Yes.....there was a dog meandering about the restaurant. Grant dubbed him "Pizza Dog".

Our bill came and it was written in sharpie on a piece of paper. The restaurant was really a "hippie" kind of joint with weird art all over it and the nature of the bill was not a surprise to us. Even our plates were paper and the eating utensils were plastic. We figured the owner was "anti-computer" when just about then our waitress came by with an iPad that was outfitted with a card reader.

Afterward we wandered about Sabula taking in the river scenery, popping a few images into our respective cameras, and walking around the town. I think one could spend an entire day photographing that small city. There are a lot of interesting buildings, textures, and of course, Bombfire demands a good look as well.

After a while we figured we had better run across the river to Savanna, Illinois to secure our room at the Super 8 motel. When we crossed the causeway and ultimately the bridge over the channel, I was glad we decided not to try to ride from the motel. The causeway was very narrow. I doubt it had ever been modified since first being put in and reflects the narrow nature of early highways. I certainly didn't have any desire to ride a bicycle on it!

When we got to the motel, we saw Ari, his wife, Mike, and the others staying there. They went on to go eat at Bombfire. We went in and got the room, settled in, and visited the convenience store to supply ourselves for the next day's ride.

After returning to the room, the discussion turned to when we should get up to get going. It was decided that 3:30am was a good time, so alarms were set and we crawled into bed. The A/C unit was set to "ice", apparently, because it got darn cold in the room during the night. I had a bit of trouble falling asleep, and then was awoken by a loud party at 2:00am, after which I never did really go back to sleep from. Not a very good night's rest, but there was nothing I could do about it then.