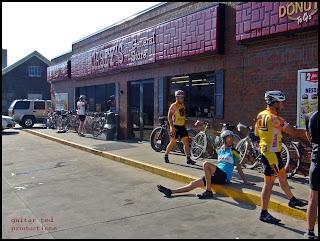 The group, now numbering 24, rolled on to Maquoketa's streets a bit after 8am and literally fell upon the Casey's General store like a horde of locusts. I was stopped before walking in by a bit of conversation, and by the time I did get in the breakfast pizza had been wiped out and the line was ten people deep at the cash register.

Well, fortunately for me there was a quick witted employee there that had seen the carnage happening and was "johnny-on-the-spot" with another breakfast pizza within minutes of my entering. Nicely done!

Ari and I gave the group plenty of time to digest and use the facilities before we were to split into two groups. The"short option" folks would go with the Bonk King back on a parallel route to what we used coming out and end up with 65-ish miles and at the starting spot so they could easily get home. The Bonk King stated that he was not in a big hurry to take the seven riders with him and that we should hit the roads first. We took his advice and headed off to some more gravelly goodness.

One thing we didn't do- and we ought to have done- was to count how many left for the long route. Well......we didn't, and it turned out okay. But this points up my inexperience with dealing with such a large group ride where you have to make sure no one gets dropped.

As we hit open country it was quickly noted that the heat was intensified by an order of magnitude over what it was coming into Maquoketa. At first I was not too concerned, as I was doing okay. I thought I was holding my own when we came up to a stop to gather up the stragglers.....which was me! Hmm....

Then I was starting to get really worked and really hot. I was plugging along at the back, but it was stifling hot, at least I felt very hot, and I was wilting. Really not having fun anymore.

It was too bad too, the roads were spectacular. Not Nebraska, "Odin's Revenge" type unusual, vacant territory, but Iowa style beauty that was right up there with anything else. I definitely was awed by the scenery. I felt I needed to say something to Ari about it.  I rode up to Ari, (one of the rare times I felt strong enough to after the break), and told him he did a magnificent job and that the ride was doing really well. I thought. Ari was riding so strongly. He had his Salsa titanium single speed, and you'd never know he was on a single by the way he rode off with the geared folk. Really- this was all his ride anyway, he did all the legwork on it and sweated the details.

Eventually I managed to drag my carcas into LaMotte. This was a planned rest stop. There was a city park with a shelter and a water source for us to utilize. By this time I was aware that a few people were worried about me and were kind of shepherding me along. You know who you are and I thank you for watching out for me.

I got to some cool grass and laid down flat on my back. It felt great and all I wanted to do was go to sleep for a while, but I could not do that with the expectations of the group and the fact that this ride is named after me. I felt really low about all of it, really. It was kind of hard to deal with my fortune in life at that time, but it was what it was.

I decided enough was enough. It was kind of ridiculous for me to be the anchor dragging back a group of stronger than me riders and making them take more time to do a route that was already going to be a late in the evening proposition to finish. I approached Ari and announced that I was bailing out. I had plenty of time to get myself back to Sabula and I roughly knew the way. I was all prepared to go it alone when several of the riders were trying to cheer me up and talk me into going at least to the next stop. The next stop.........which was the furthest point in the ride from the start. I was well aware of this, and also that the toughest hills of the ride were in this part of the route. To say I wasn't too stoked was an understatement, but I reluctantly agreed to their plans for me.

As we rolled, very slowly, out of town on a blacktop road, I was starting to really feel it already. Working hard and being so darn hot was really frustrating and was making me go slower. Suddenly, Chris Paulsen declared that he was bailing since he had a family obligation. The group was turning left. I asked quickly where he lived, and he said "near Bellevue". That was going in the right direction, as far as I was concerned at the moment. I then announced I was bailing as well, and I think only a few people caught on to that at the back of the group, but in a moment we couldn't see each other and the deed was done.

Chris felt a bit bad at first, thinking he negatively influenced me, but no- this was the correct move not just for me, but for all of the group. (The rest would not finish the entire 135 miles until either side of 9:00pm later that evening. Had I stayed, it would have been far later!)

Well, I was headed back to the car now, but the ride wasn't over just yet. We had a bit more "up" to go, then we had a sweet three mile downhill run into a few small rollers before we got to Bellevue. Chris was a great partner for me. He was hot and feeling like going slower as I was, and we chatted as we ran down the gravel to town. We talked about his racing days, folks he knew, and his and his wife's veterinary practice.

Back in town, we stopped for some ice cold sodas and sat in some A/C for a bit, which did me worlds of good. Then we hit Highway 52 South of town till we got to a right hander and gravel roads again. Chris led the way to his home driveway and a long, snaking two track back to his awesome, rustic farmhouse. I asked about mileage, as I had no computer, and it looked like we had ridden about 75 miles for the day.

Then he and his wife allowed me to have another soda and made me a sandwich before they carted me back to the start in a 4X4 Chevy. Chris had to go back and get his truck anyway, so it wasn't a big deal. I said my thanks and we traded goodbyes as they both left. Here I was- back at my truck....alone....and the air still stank like it did in the morning!

I thought that was odd. Then I noticed that the ground was soft and sounded funny. It was the source of the smell. A billion dead Mayflies rotting in the sun. "Huh..... , I thought, as I grabbed a still cold New Belgium from my cooler and drained it, "Figures!"

Well, an ignominious end to a ride I am associated with. I felt bad, but I knew I was doing the group a huge favor by cutting myself loose so they didn't have me to worry about. I got home by 5:00pm, and was in bed by 10:00pm, which gave me a good rest up before a busy day of work. Had I stuck it out, I doubt I would have made it to work Monday!

I really like that you appreciate and mention Iowa's beauty in your posts.

Riding gravel is a great way to appreciate that, too, since you aren't worrying about traffic nearly as much as on paved roads.