Well, on Wednesday evening, in the dark, without a helmet, (but with a head light and tail light!), I had my first ride on the Gravel Mutt.

There have been a lot of curve balls and left turns since my last update, but I feel that they are all either better choices, or just plain good fudges for the situation I found myself in at the time of assembling this.

The overall goal was to always either use a parts bin find, a free part, or to use original equipment. I am glad to say that the only thing I purchased specifically for this bike was the Brooks saddle. Now- that doesn't mean I won't be buying new parts for this bike. The idea is that if I like the bike well enough, I may adorn it with upgrades as I go along, but the goal I set for trying to limit purchases was for a specific reason. That will come out in the Gravel Grinder News series soon. For now, I'll just detail where I made "left turns" and other off-beat choices in order to get this bicycle up and running sooner than later. 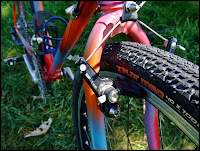 Brakes were always kind of an "up in the air", last minute type of decision, and it did come down to the night before I finished the bike before I decided. I had a set of blue anodized, Grafton knock-offs that were prevalent on many late 90's hard tail LBS bikes, but they didn't fit right on the brake bosses.

Digging around in my parts some more, I found the XT linear pull brakes, but only one of the Travel Agents that would be necessary to use them with STI brifters. I tabled that idea and dug around some more. Then I found a set of SunTour XC cantilevers. They look like DiaCompe 985 knock offs, but at least they were all there. I tried them out and they fit perfectly. I also had the matching cable straddles and hangars too, so everything is a match on the brakes. Kool Stop Eagle Claw pads that were on there looked to be in great, albeit very dirty, shape.

Funny story: I set these up and when I test rode the bike, the first few stops were quiet, but then a horrible squeal developed in the front brake. Upon inspection later, I found that the hardware that affixes the pads in place had come very loose. Whoops! A 10mm wrench and a 5mm Allen key later and I was golden.


Where I made the biggest divergence from the original story was in terms of the crank set and gearing. Now you never would have known, but I was going round and round for days on the geraing for this bike. Odin's Revenge pretty much cured me from wanting a 1X drive train, as originally planned. So, what to do?

Well, oddly enough, the crank set from my Karate Monkey ended up becoming the crank set for the Gravel Mutt. I found a 48T big ring, (I really wanted a 46T, but...), and the Surly ring from the KM is a 34T. I also popped on a 28T granny I had sitting around for, well.......I figured "why not"? There was a fresh 11-34T 9speed cassette on my bench, and I looked at that and thought, "Why use the seven speed cassette when I could do 9 speed and then be able to swap wheels with the BMC?" I could not figure out a good reason not to do that, so seven speed rings up front, 9 speed cogs out back. Perfect!

Now all this gearing non-sense precipitated a debate within my noggin' about shifters. I could use the bar end shifters in friction mode, or.....the old Ultegra 9spd brifters from the BMC! Of course, those were take-offs when the Retroshifters came around. Great! Then a customer at the shop replaced a decent, good to go, 9 speed SRAM chain with a new one, and didn't want the old one. A few links of extra added in from my stash and there was my 9 speed chain. (Yes...it works perfectly with the seven speed rings. Really.)  Oh....and I used the original serviceable, cup and cone bottom bracket. 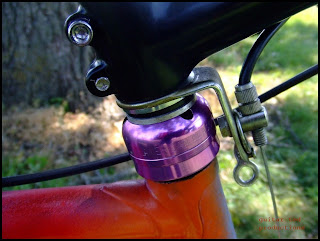 Okay, in regards to the head set area, there is a lot going on that may not meet the eye. I did note in an earlier up date that I needed to get an adapter for a 1" steer tube to be able to use a 1 1/8th threadless stem and that was not a big deal. But I had forgotten all about a cable hangar.

Typically, one would have to use a 1 1/8th threadless hangar, but I could not locate the one I thought I had anywhere. After giving up on that, I realized that the quill adapter had to taper down to a 22.2mm diameter, which might just work with a threaded 1" type cable hangar. I had to knock off the keyway with a file on the hangar and a couple of spacers, but it all worked and fits snugly once I jam the quill adapter down to capture the hangar and spacers against the top of the head set and the taper on the quill adapter. The hangar even has a quick release. Bonus!

Finally, the American Classic head set does not have wrench flats, but I knew that there was a "trick" to adjusting it. I just could not recall what it was. I was lying in bed and it suddenly came to me and I sat straight up. A pin spanner! The three Allen head screws that hold the adjustment are also the sockets the pin spanner fits into to properly adjust the head set.

The sad thing is that I am not sure the head set will end up working well. It fit kind of loosely on the crown race and head tube, and if looseness in the head set persists, I may have to fall back on a silver anodized Campy Athena head set I have that is NOS. Yeah......that wouldn't be too bad, would it? It's just that I would like to save that for a special touring bike build some day. We'll see.....

So- there she is! I'll be riding it more after the GTDRI, and will report back again after that. Stay tuned for that and the new series on Gravel Grinder News.

Looks great GT. To bad Brooks does not make a tye dye saddle though ;-)

Enjoyed watching this progect come together Ted. I do not have a lot of knowlage or interest in the UK road bikes scene, but i like your gravel grinding scene and the bikes,
Parts bin bikes can often be more rewarding to ridem as is the build,

I used that exact fix to put a front brake cable hanger on my 650B fixed Schwinn Sierra conversion.