Many folks have been speculating on the B+ thing and/or wanting to know more about what I think about the way these ride. So now that I've put out some thoughts on TNI.com here, I will expand a bit upon that with this post....

Okay, first things first: I like it. That's pretty much the bottom line, and of course, I will have a detailed account for why that is, but for those who want the short version, there it is.

When I was first told about this format, and the idea behind it, I was at Interbike 2012. So, this goes way back to the guy that had the idea, Bob Poor, and his idea was that 29+ was well and fine, but what could you do with a big fatty tire that had tons of volume in a frame that you already had? What could be made that already exists, (mostly), and only have to make a tire? So, the 584ISO size was becoming a big deal then, and what if a big, meaty tire was made to fit on that which would result in a 29" diameter? Could that fit existing 29"ers? This was the design intention for "B+"/27.5+ from the very outset.

So, with the intentions for B+ to work with existing 29"er frames and forks, it had to become a tire that would maximize volume first and width was going to be important, but somewhat secondary to achieve the design goals. As I have the B+ set up on Blunt 35 rims, the WTB Trailmaster tires are at 2.67" wide at the casing. They are about 60mm from the bead/rim interface to the top of the tire's crown. Compared to a Surly Knard 29 X 3.0 on a Velocity Dually, the Knard measures out to 2.93" in width and 63mm casing height. (Both the tires tubeless). So, the volume is mostly there, you are just missing the width of the casing compared to 29+.

The other important component to making these fit is the overall diameter. The 29+ Knard/Dually is around 31" in diameter. Clearly- that won't fit most 29"er frames at all. The B+ Trailmaster comes in at a much more manageable 28 9/16ths diameter. It does fit most 29"ers. 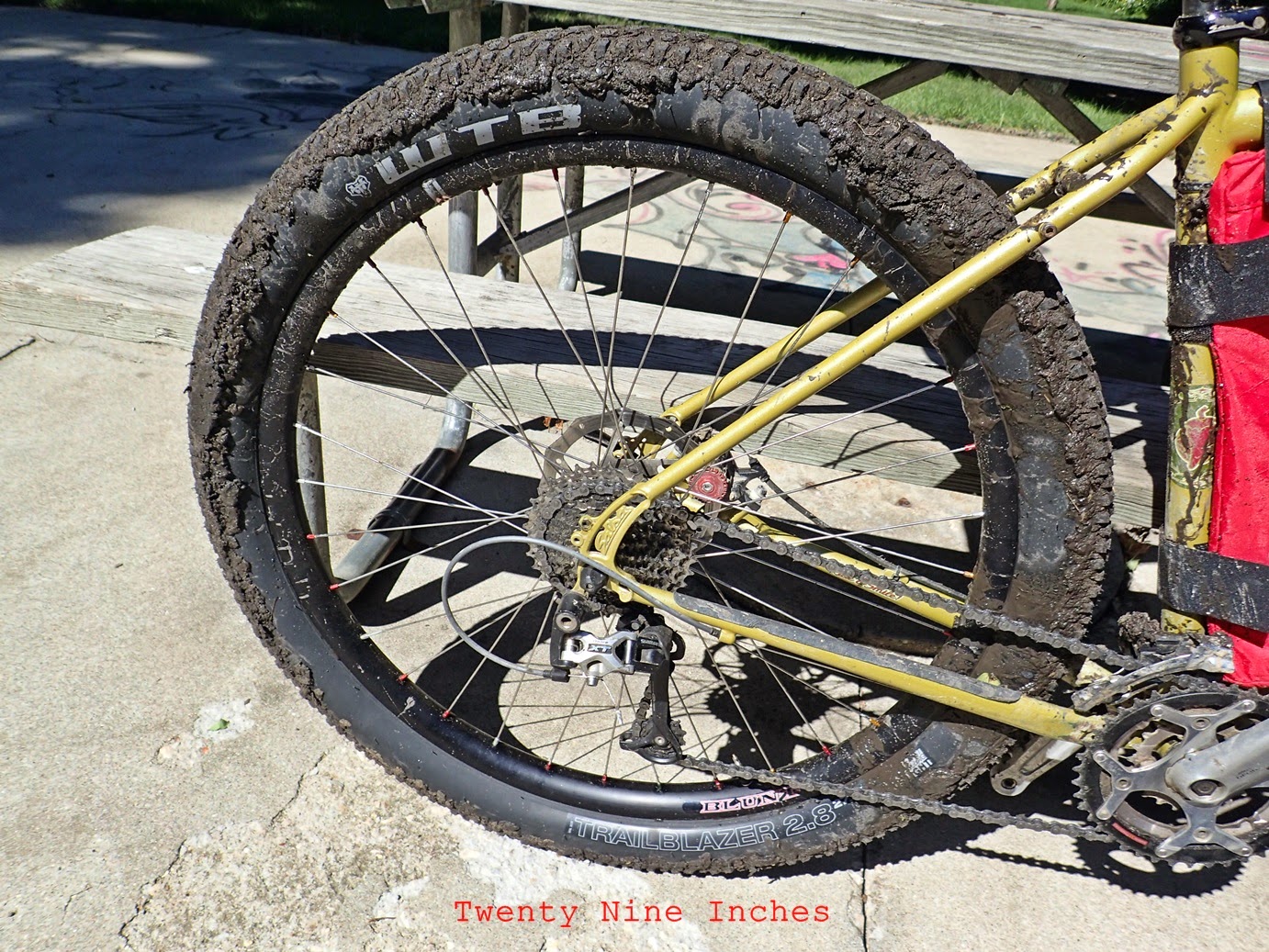 Okay, so does it work like a 29+ wheel? Better, and not so good. Better since it doesn't take so much energy to spin it up. Not so good since you don't have the total flotation characteristics and larger diameter of the 29+ wheels. It's a compromise, like anything bicycle related. It's better if you don't want to, or don't need to buy another bicycle frame and fork, (assuming you have a 29"er already), but not so good if you just want to have something cool and different. It's not so good if you are smaller and have to deal with geometry compromises with 29+. It's better since you can have most of what a 29+ gives you and have a frame that works better.

Getting back to the ride: Yes, it is pretty dang cool. It rails, it absorbs bumps well, and it performs on sand pretty well too. The Trailmaster is limited mostly to dry stuff, since it lacks any big lugs and wide spacing to deal with mud. It's a fast rolling tire. It spins up well compared to the 29+ wheels I've tried. Now- it isn't anything compared to an XC racing wheel, which is ridiculously easy to spin up, but those are not high volume, bash over anything wheels either. These are, more than not, a point and shoot wheel set. I think they would be great for smaller folks in a bike packing setting that feel 29+ wheels are too ponderous.

I'll be putting these on a front suspended rig and a FS bike, (maybe- I have to build one back up from a frame I have sitting in mothballs if I do it.), and I'll see how suspension does with these wheels. More riding needs to be done. Stay tuned.......
Posted by Guitar Ted at 1:30 AM

I am pretty excited to put a 29+ wheelset on my fat bike but have some concerns about tire options with the Bluto. I'm pretty sure the Dirt Wizard is out of the question but was hoping for the Chronicle as an option along with the Knard and the Vee. If you have any, or get any, first hand knowledge of these clearance issues I would be stoked to know about it before I spend money on tires that may not work out so well. Thanks!

@Cyclebound: the Knard is definitely an option, (see my Twenty Nine Inches report with an image showing the clearances here: http://twentynineinches.com/2014/07/16/borealis-echo-29-version-mid-term/ )

But yes- you are right about knobbier offerings. I have seen where a Panaracer Fat B Nimble 29+ fits into a MRP Stage fork with what looks like plenty of clearance. I will say that by measurements I took, a Knard would not fit the Stage fork.

I measure 31" (approx), diameter for a Knard/Dually tubeless at 20psi. Just for reference.

I was looking to do a B+ conversion on my Ogre. I was curious if you mounted the trail blazers on anything wider than the p35's? And if not do you think you would have the clearance in your Fargo to accept that tire on something wider Ex. Stans Hugo, WTB Scraper, or the Dually? Thank you in advance for your time!

@ Jacob Nelson- I never did use a wider rim because my former testing partner in Germany did. It was quite clear from his measurements and my experiments that the wider rim on a Fargo with the Trailblazer was a no-go. At least with Gen 1 Fargos.

I put these on my Santa Cruz Tallboy 29er....with Spank Oozy Trail rims and hadley hubs in 650 B+,,,, awesome downhill ride.... smooth. The Spank Bite on the tire makes Tubeless a snap!