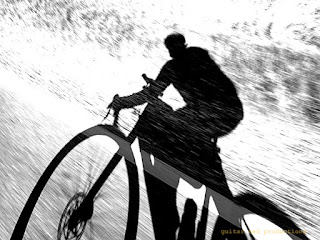 March of this year was looking to be a busy, busy month. N.Y. Roll and I had the C.O.G. 100 coming up fast. Last minute recon needed to be done, and things were coming together in that old familiar way for this guy who has put on events for 15 years. I was looking forward to all the reviewing and all the changes coming in the gravel scene. Then.......

Well, you know all about what came next.

For the next three months I lived in great fear and a renewed sense of wonder simultaneously. On the one hand, I avoided people like crazy, washed and sanitized like my life depended upon it, (because that was the messaging then) and my only time out of the house besides work was to ride my bicycles in the country.

Out there I found the wonder, the peace, the beauty of creation that had always been there, but which I hadn't really appreciated all that much. Not like I should have been. And I found escape. Escape from news, from politics, from people saying one thing, and then another. Escape from the fear and anxiety. There were times I never wanted to ride back home.

The rides to work were weird. The normal crazy traffic was gone. I almost didn't have to look for cars. There was a quietness that was unprecedented. It was the missing din of cars, trucks, and motorcycles. People were staying home, and the effects on the outdoors was immense. I actually found this aspect of what happened really nice, actually.

There was something about April and May that I miss. Not the fear and anxiety part, but there was a peace over the land and everyone had slowed waaaaay down. The pace of life seemed much more manageable to me, anyway. Maybe not to you and others. I liked that part of what happened too.

Then May ended and so did the peaceful, slower pace of life. Folks eager to 'return to normal' made the highways busy again. Folks seemed to relax and go back to pretty much the way things were before with the caveat that there were none of the recreational/distractional facets of 'normal' life. Things like restaurants and movies, motels and amusements of all sorts- these were still discouraged. So, the focus changed to outdoors activities, including cycling, and the economy got hammered on that end while the 'normal' businesses were left hung out to dry. And then the political mayhem kicked in.

Presidential election years are something I disdain and I do not look forward to all the grandstanding, hearing the lies, and seeing all the money wasted on print ads and digital stuff. It's rather embarrassing from a national standpoint, not to mention extremely annoying to deal with. Schools were gearing up to bring students in and with a son still in public school, I had that fear and anxiety to deal with concerning his safety as well. Fall came and so did the higher numbers of cases and deaths caused by this plague. The weight of all this and having more concerns about myself and my family's safety was overwhelming.

Winter is here now and we are still going through the dark valley. The days aren't just shorter, but the times are dimmer as well. People are struggling. Hope seems thin. Holiday seasons are rough enough for many of us without the extra weight of the rest of this nonsense.  So far, we're okay. I am still having rough days, as I am sure many of you out there are. 2020 may be over, but we're still needing to make our way. I'm reminded of an old John Mellencamp song these days:

"Now more than ever

Not just a slogan

But the world needs Love

Now more than ever I can't stand alone

Now more than ever.

We've got a long ways to go yet to make it to the other side. I know I'll need encouragements and I know others will as well. Let's be part of the solution and not part of the problem. Going forward won't be easy and well........when was it ever? This is really just a different set of problems and obstacles to overcome or, at the least, be dealt with in a way that builds us up, as long as we build each other up as well.

Tomorrow a New Year starts, but really, it's just an artificial marker. A boundary that doesn't really exist, we just believe that it does, so we make it real. We can make what we need to be real come to life in 2021. All we have to do is believe.

Artificial marker or not...happy new year to you Mark! Thanks for all the time and energy you put into the blog - I'm looking forward to another year of gravelly learning here!

@Ben - Thanks for reading and Happy New Year to you as well.

Wishing everyone a Better New Year - if it can be Happy too be thankful!

Mark, hats off to anyone who can write something personal everyday without descending to snark.

It's always true but we're all of us living through History. Pay attention folks! But most of all, enjoy your bikes, enjoy the (gravel) road and enjoy the view.

@MuddyMatt - Thank you very much and Happy New Year!