More About The UCI "Gravel Worlds" Made Clearer Recently

A recent "Velo News" article (you can read it here), written by Betsy Welch, has made some details of the planned UCI World Tour for Gravel and the climatic event of the series, "Gravel Worlds" a bit clearer.

In the article it is revealed that there will be gravel "qualifying events" in many countries and on most continents. "More than one" of the races will be in the USA, while Central Africa, Holland, Europe, Asia, and Mexico were also mentioned as places where events will occur. Apparently, all but a few are existing events. Particular to the US events, it is stated that these events will not be any of the "big ones" where thousands of riders attend. Apparently USAC has helped to vet out events which have somewhere around a thousand participants up to 1500 on a regular basis.

Furthermore; it is being reported that USAC is being very careful to craft the look and feel of the events to be in line with "the spirit of gravel", although it also is reported that these events will be ones that have held a high level of production in the past. According to the language in the article linked, the three US based events have already been determined.

An announcement regarding the series of 15-20 events and where the "Gravel Worlds" will be held will be forthcoming in "early February", according to the article. 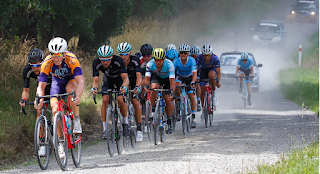 Comments: This will be interesting and almost answers the question of "How does the USA Cycling organization wheedle its way into the gravel scene?"

The answer, apparently, will be to grow a series of events to support the feeder to Gravel Worlds/UCI Pro Tour level gravel racing. (Sound familiar?) As I have said- It is the same-ol' tactics that worked to turn MTB and road racing in the US into what it is today- meaning a not very fun, not very profitable, not very inclusive form of cycling. Of course, I could be wrong, and I am sure that the USAC and UCI folks have good intentions.

But already there is banter about "rules" and "bike regulations" and what constitutes a "gravel race". Initially this article would give one some hope that the UCI/USAC rule makers are trying to steer things in a direction that the mainstream of gravel events has gone. However; when discussing courses, there is an initial mention that "75%" of the course must be gravel, but then Erwin Vervecken, the off-road and gravel manager of Golazo Sports- the main event organization helping the UCI -, is quoted as saying that some countries don't have a lot of gravel road networks so there may be only "....60 to 65 percent gravel".

If Golazo Sports is willing to waffle a bit to get the series going, then perhaps we can expect some waffling on rules until this gets off the ground, and when people are invested? uh-huh........ We shall see. I suspect any "spirit of gravel" will be defined in quite a different way down the road. That is "IF" this takes off. Vervecken was quoted as saying he expects World Tour Pro level competition up front while the mid-pack to back-of-pack riders  would be "........ fun riders who stop at the feed zones, who stop for a drink and something to eat, and then ride in a group with their friends. Their goal is to finish the event,”

Sounds good, but that misses the point. Basically- in terms of business, (and let's not forget that Golazo Sports is a HUGE corporation which generates over 15 BILLION in sales a year), your "field filler", "mid-pack" riders are the ones footing the bills for this Pro Tour series. (As of now, no presenting sponsors have been named, but I would assume that this is also in the works) Is this comapny even capable of doing anything "in the spirit of gravel", or should I say "The $pirit of Gravel"?  Hmm....

Well, it will be interesting to see what becomes of all of this. Oh.....and you are also probably wondering what I think about Tuesday's announcement on the Gravel Cycling Hall of Fame.

I have words on that in this week's "FN&V"

Quick, someone trademark "The Spirit of Gravel"! License it back to anyone that wants to use it! LOL!

Also, it is notable that the name Gravel Worlds, is a trademark held by the promoters of the original Gravel Worlds. They’ll need to call it something else.

@MG - True! I noted that the article I linked at no point brought that up at all. It would be super-ironic if the GW team in Lincoln sent the UCI a cease and desist after what happened about five years ago in regard to the rainbow stripe thing. LOL!