Last Saturday I ran a piece about the supply chain issues and how that will affect 2022. I also hinted that many in the industry were thinking that 'the bubble will bust' when supply levels come back in the amounts that have been ordered, while the predicted demand for this stuff is agreed by most experts to be less than expectations are.

An article published recently in "Bicycle Retailer and Industry News" authored by analyst Rick Vosper seems to be saying that even if retail demand goes back to pre-pandemic levels, those levels were on the decrease, for the most part, and 2019 in particular was a very poor year for bicycle imports.

Most experts seem to agree that a tsunami of high end imports will hit retailers at the end of this year with 2022/2023 orders stacking up against one another in a short timeline for dealers, forcing deep discounts. Standard fare will also be in overstock levels as well due to a similar situation, but......

There always is an exception.

The other thing the experts seem to agree upon is that this will force a big pull-back in the industry in orders. This whiplash effect in the supply chain will leave vendors, and most vulnerable of all- bike shops- out in the cold. While the experts didn't go as far as to say that there would be business failures as a result, they did say that a lot of bike shops are in a highly leveraged situation now financially. That could spell disaster if the supply chain hiccups that experts are saying will be coming in '22 and '23 happen.

RAGBRAI Gets A New Director:

Gannet/Des Moines Register/RAGBRAI announced last week that it will have a new leader for this year's RAGBRAI and future editions of this event. Former director, Dieter Drake, was promoted upward in the Gannet organization to be "events operations director" for the cycling division of  "Ventures Endurance", a subsidiary of Gannet Corporation.

The new director is Matt Phippen, formerly a sales director at the Iowa City Scheels location. Phippen takes over effective immediately. I'm sure RAGBRAI won't see too much in the way of changes from this, at least in the near term. My interest comes from the somewhat unknown "The Great Iowa Fall Ride" event, which was a project that Dieter Drake was exploring pre-pandemic. (I wrote a bit about this last year here)

Originally that ride was to be set in Iowa Falls and be a three day, gravel road oriented affair. The idea being that it could be a way for RAGBRAI to extend its revenue stream. My question is, what will become of that idea? And if it comes back as a gravel ride, does that then influence Dieter Drake, as the head of the cycling division arm of Gannett , to produce more events like this in other locales in the future?

Gravel riding is a big deal now, and 'getting in on the action' is one event promotion corporation's agendas now. We see Life Time Fitness cashing in, USA Cycling is wedging itself into the scene from a competitive side, and it only makes sense that communities and regions would be willing to work with big corporate entities to bring in the promise of tourism dollars and the economic benefits thereof.

In fact, I was called by a person doing consulting/coaching with teams and cities concerning bicycle trails this week regarding the gravel scene. So, this is on many people's radar now. I look for more to happen in this regard in the near future. 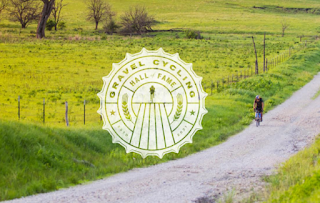 More Reactions To The Gravel Cycling Hall of Fame Announcement:

Okay, first of all- yes, I've been nominated. So, I wanted you all to know that up front.

Second of all: Whoa! People sure got their chamois' in a wad over this deal, that's for sure! Ya know, I did see someone on Twitter say that if a Gravel Cycling Hall of Fame celebrates cycling, then why would any cyclists be against that?

And I guess that's my favorite reaction, and my adopted response from this point forward. I  mean, if you don't like it, just move along. What harm is it going to bring to cyclists? If you think it is stupid, just forget about it. Giving it space, rent free, in your emotions and mind is, well.......dumb. Just don't bother with it.

Finally: Many people are saying very flattering things about me and my work in the gravel scene. This is an example. So, that's very humbling and I so appreciate all the sentiments being expressed now. It's kind of hard to process this, for me, and I'm sure it probably always will be. Anyway, even if I never were to get into any hall of fame, I'd be proud of this moment in time because so many folks are coming out and putting my name out there as "belonging" in a hall of fame of gravel cycling.

Weird.It's all so very weird to me.

Regarding the HoF, I don't have strong feelings about it one way or the other, but certainly think there's interest and value in documenting/detailing it's history; of the past events and individuals that pioneered the activity. I think some younger folks may just "assume" that stuff is all detailed somewhere in social media or the internet, when I imagine much of it is not. Either way, I find it just weird that some cyclists have spent some much time and energy writing articles / aarguments against it...maybe they have waaaay to too much time on their hands during a pandemic winter to stoke up some fake outrage. Oh yeah, I'll probably nominate you also and will consider this permission, unless you tell me not to : )

I am not for or against the Gravel HoF. I just think of it as another power move people pulled in order to ensure their position in the cycling industry. A few years back I joked about and was half serious about starting the Iowa Gravel HoF just to be obnoxious. My intent was to rile people up because they are taking a hobby and making it not fun by their drama. Ride your bike your way as long as it does not harm others. And if Mike Johnson does not make the HoF it is BS. In one year, completed TI, Alexander and DK 200. No wins, just adventure on that saddle.

@N.Y. Roll - Here is something I found on Twitter in reaction to a completely different subject and is from a UK citizen. I think it fits as a reaction to anyone who is "upset" about the GCHoF:

"It's the most easily mutable thing. Just mute it, stop yucking other people's yums, and move on."

@Ben - Yes, you may. And to your point on the history and that perhaps much of it is not written down. you would be 100% correct. In fact, just this morning I found out what the origin story is behind the Pirate cycling League. Not to mention, I bet that most folks have little to no idea who the people were behind Gravel Worlds pre-Jason Strobehn.

I think that the GCHoF will help rectify that 100%. I hope to bring some light to this as well.

You know may I should start a Gravel Gods or Gods of Gravel website ;) but seriously as I said in a personal text to you. I will probably treat this exactly how I treat the Rock N Roll HoF, I am stay on the interstate as I drive by.