Last year a big announcement was made to the effect that there would be a big three day ride out of Iowa Falls in the Fall of 2020. It was sort of an answer to RAGBRAI being cancelled and also another revenue stream for the RAGBRAI organization. However, restrictions due to COVID did not relax enough in time to hold that ride. Many have wondered since what, if anything, might become of this ride.

The ride is on Sunday, October the 10th, and cost $60.00 if you beat the early-bird registration deadline. You can learn more about the Great Iowa Fall Ride here.

Vibration Damping Idea Not For Gravel?!

The term "vibration damping" is a buzz-word in the gravel scene these days. Frames, tires, heck, even wheels claim to cut down on the buzz of crushed rock roads. So, when I see the term in someone's marketing chutzpah, I take note.

This time the product is shoes, but they are not aimed at the gravel market. The Giro Latch shoes are supposed to have a damping effect for riders of flat pedals on rough trails. They call the mid-sole material "Mute Foam". I'm surprised this has not been applied to Giro's shoes for gravel, to be honest. Well, perhaps I shouldn't be. I took a look at Giro's site and they do not have a category for 'gravel shoes'. Ha! Figures..... 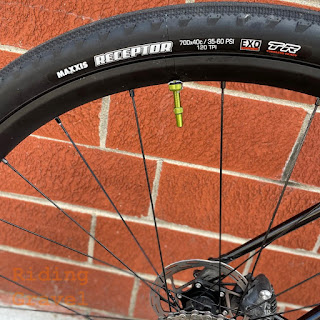 Once in a great while I get Andy from Andy's Bike Shop to test something for RidingGravel.com. Well, he hasn't had anything to test for about a year now, but that has changed since he has these new skins for his Twin Six Standard Rando.

He chose to test out these new Maxxis Receptor tires. These were announced just last February and I wrote about them on an "FN&V" post here. They appealed to Andy as a tire he expects to be fast on pavement and decent on gravel.

They certainly have that look. Smoother center, edge knobs for support. As I said in February, much like a WTB Byway, or maybe these have a passing resemblance to a Challenge Gravel Grinder model. But at any rate, they should be fast.

As for how they mounted, I haven't heard about that yet from Andy. He'll let me know and I'll get something written up for the site soon, but hopefully they were not like the old Ramblers, which are a pain in the butt to set up tubeless. (UPDATE: Andy informed me that yes- these are just like the Ramblers and are really hard to mount tubeless. Yay!) Stay tuned for more on the Receptors soon..... 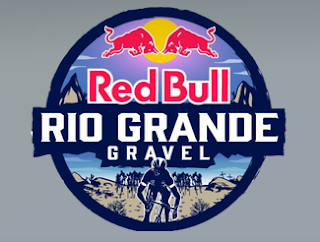 Colin Strickland and Payson McElveen have known Texas as home and want folks to get into it via a gravel event they have cooked up with their mutual sponsor, Red Bull. The event, to be known as the "Red Bull Rio Grande Gravel Event" is set to take place on November 13 with registration opening soon on September 17th. There is a 500 rider field limit for this 100 miler. The event will take place out of Marfa, Texas which is in the Big Bend region of the state.

Comments: Marketing hype is big with this one. Keeping in mind that this race has never been run, even once, they say, " Bar none, the hardest 100-mile gravel race on the planet." Wow! But, whatever. They can say what they want to and ya know what? People that end up going to this will just believe it and no one else will care. So, there is that. Truth? Pfft! Doesn't matter anymore, I guess.

Interesting side note: Red Bull was a sponsor of the very first modern day gravel event. I happen to know since I was there. So, Red Bull is no stranger to the gravel scene. They also prominently have sponsored other gravel events, most notably Rebecca's Private Idaho. Red Bull is into all sorts of stuff, so if you know anything about this company, it shouldn't be a surprise that they would sponsor a (soon to be big, I guess) gravel event in Texas.

That's a wrap for this week! Have a great weekend and thanks for reading G-Ted Productions!

Pretty flat in Marfa, but I hope they take you by the Prada Store and also stop for a Marfa Burrito.