Now I was headed, mostly, West as the North and East sides of Black Hawk County had been traversed. I decided on the 'North' route option instead of the South one to get from Black Hawk/Buchanan Road to La Porte City. The two options were similar, but the North route had .3m more gravel and was 1.3m shorter in distance overall. The main thing for me was the route staying inside Black Hawk County instead of getting into Buchanan and Benton Counties.

I rolled into La Porte with 55 miles under my wheels at 10:30am. Pretty good time and an hour in the bank against my time limitation of 5:00pm. I decided not to go to the convenience store and instead I stopped at the gazebo on the Cedar Valley Nature Trail to rest and swap out clothing.

By this time it was pretty warm, and a vest wasn't needed. I took that off and rolled it up and stowed it in the frame bag. Then I sat down to munch another half of a PB&J along with a few Dot's pretzel sticks and water. Meanwhile a group of cyclists came up the CVNT and rolled into the gazebo where I was sitting. These were recreational cyclists out for fun. Some of them recognized me as that "legendary gravel guy". I retorted back saying, "Well, I am either legendary or an idiot. One or the other!". This brought a round of "Oh no! You aren't an idiot!", until one of them piped up and said, "Maybe you are just a legendary idiot".

All in good jest there, no offense taken or given. I then packed up my stuff, popped on my helmet, and headed off to hit up Reinbeck Road and a big push Westward. The Sun was riding high now, and the wind, which had come up before I started going West, was out of the Southeast. So it was a quartering tailwind. That was nice!

Unfortunately Reinbeck Road was a complete mess of fresh, deep gravel. It was as bad as it was when I started the ride back near Janesville. The deep gravel was taxing my legs and the heat was getting hotter. I also had been distracted by the group back in La Porte and I had forgotten to take some ibuprofen and electrolyte tablets I meant to take. The ibuprofen to deaden my left shoulder pain, brought on by the rough, deep gravel, and the electrolyte tabs because I was sweating a lot by this point into the ride. 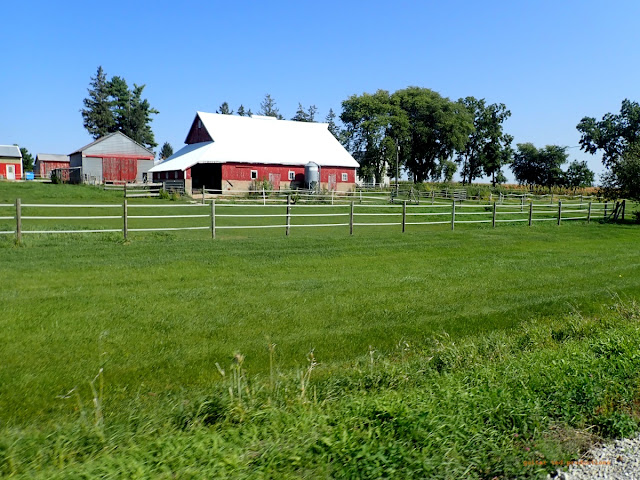 I knew there was a good place to stop at the intersection of Reinbeck Road and Ansborough Road. That's where I stopped and downed the pills and took a bit of a rest from the hard pedaling through all the fresh gravel. Once I left that spot the gravel let up a bit and it was more typical roadway for several miles, which I welcomed. Now I was getting into the Southwestern corner of my route. Here I had to make a detour into Tama County so as to avoid some paved roads. This allowed for a trek through the three straight miles of Level B Road on 110th.

The plan was to stop and eat my last half of peanut butter and jelly sandwich on one of those three miles of dirt. I also ended up taking off my bandana from my head and my Sun-sleeves. It was beastly hot by this point. Like Summer-time, really hot! Worse than Gravel Worlds had been this year. I didn't bother to look at my phone to check the weather then, but later on I found out it had reached the 90's! From 40° to over 90°! No wonder I was cooking! What a wild swing in temperatures.

But the good news was that I had reached this end of the course by noon. I had 35 miles to go and five hours to get it done before my time limit! I must have been pushing it really hard on Reinbeck Road and not realized how hard I was going. I had bagged another 30 minutes since leaving La Porte City. Crazy! No wonder I felt cooked.

So, I came up with a plan. I needed to break this down into chunks. I decided I would go ten miles and rest. That meant I would have three chances to stop before the end. Okay, let's put this to bed then!

Next: Part four, and the final chapter to the GTDR/ToBHC story.