Now with the Sun up, there was that time which many call 'The Golden Hour' when you get that fantastic light for taking images. With zero cloud cover, I was snapping off pics like crazy. It was just too good not to be doing that.

I also had to find a suitable place for a 'nature break'. Finally I found a secluded area once I got off the first stretch of pavement I had to insert into the route. While I don't like having to deal with traffic, I had gotten an early enough start that the paved roads were fairly desolate.

At this point I was fairly concerned about making good time, so I quickly ate the half of a peanut butter and jelly sandwich I packed for myself, (one half of three halves), and I moved onward after a few minutes. It was still cold, and everything was covered in dew, so now my feet were soaked too. Great! Freezing feet and damp socks. Perfect! But there was nothing I could do about that except to get back on my horse and work again. 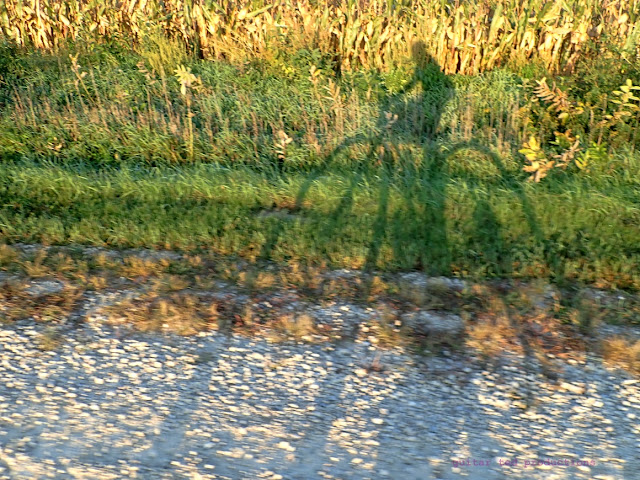 Just down the road from where I had stopped for my break, near the corner of Pace Road and East Gresham Road, I saw thousands of birds. I am not sure what kind they were. They sounded like red winged blackbirds, but I couldn't tell in the low angle of early morning light. At any rate, it was an amazing experience to see flocks numbering in the thousands as they flew all around me for the space of a half mile or so.

Now I was working the route South and I knew the roads around here well. The gravel was better too, so I started to put more time in the bank. It wouldn't be long before I would get to Jesup and my first planned resupply stop of the day.

I made it to Jesup and stopped at the Casey's General Store there to resupply on water and grab something to eat. I ended up with a Bacon, Egg, and Cheese breakfast sandwich and water. I also snagged a bag of Dot's Pretzel sticks for the road later on down the line. I made pretty quick work of the stop and was out of there in less than ten minutes.

Then it was a big section of pavement to get to Spring Creek Road, which itself was paved for a couple of miles before it went to gravel. Spring Creek Road would get me down to where I had to cross Interstate 380 on pavement, which just so happened to be on the Black Hawk/Buchanan County line.

I decided to take the "Northerly Route" once I had the East side of Black Hawk County traversed instead of taking road out into Buchanan County which was paved. Then I would have had a gravel South to the Cedar Valley Nature Trail and I would have then gone Westward to La Porte City. Instead, I went down the paved portion of Black Hawk/Buchanan Road till it went left and I continued straight on the gravel portion of Black Hawk/Buchanan until I reached the intersection with McChane Road and thus ended my Southward crossing of Black Hawk County.

So by now the Sun was fully up and it was much warmer than it had been. I was thinking of stopping to get off my vest but I was so near to La Porte City that I just wanted to get the section over with and deal with all the clothing swapping out there. This would also bring up the next, and final, resupply chance, but I wasn't blasting through the water and I probably wouldn't need any by the time I reached town, a mere 22 miles down the road.

Next: The South border traverse on my GTDR/ToBHC in Part 3

darts and heaters, bud! lol, I know Andy will get a kick out of that photo