The days leading up to the Labor Day holiday weekend were pretty wet, dull, and somber. At least around here it was. We had heavy rains for mid-week and then Friday was supposed to be great outside. Except it wasn't. It drizzled and was grey all day long. Saturday started out the same way up until early afternoon when the Sun finally came back and brightened my day.

Actually, I had planned on getting up early Saturday to ride but it was a full-on rain in the morning! So, I waited until later in the day and just did an urban alley cruise. Sunday it was supposed to get cooler and drier, so I figured a nice country ride was in order.

I was treated to a fine morning, so I grabbed the Twin Six Standard Rando v2, aka "The Gravel Bus", and headed into what little wind there was, which on Sunday meant I went North. North up Burton Avenue to the county line. That's mostly uphill, so on a single speed it can be a bit rough if the wind is strong. The temperatures were perfect. Upper 60's to low 70's, low humidity, and not a cloud in the sky to begin with.

I was also treated to 'hero gravel' conditions. Those recent heavy rains and moist days following made car and trucks press the gravel into the road bed, smoothing the surface to a pavement-like consistency. Sure, there were a few chunkier sections on the ride. Probably where cars and trucks were few over those days, but for the most part, the route I used was super-smoothed over.

It was so beautiful out Sunday, and with seeing Sunday church services going on at both working rural churches I passed by, getting waves from people, and with the great roads, I was so thankful I was able to ride. It reminded me of a song:

"I'm thankful for my country home,

It gives me peace of mind.

Somewhere I can walk alone,

And leave myself behind."

From "Country Home" by Neil Young. 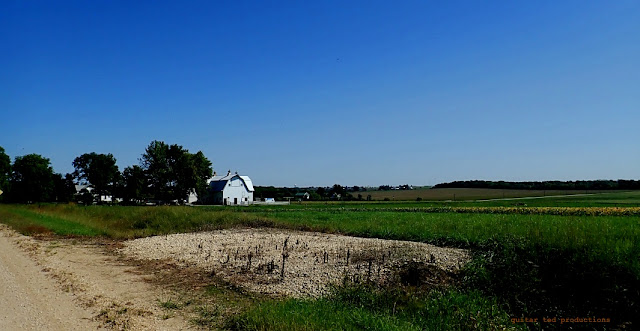 I decided to turn East at East Janesville Church which is on the county line road. That church hasn't been occupied in years, and I doubt it is going to last much longer as it seems to be decaying now with no one to look after it. I wish some organization like the Cedar Falls Historical Society could get their mitts on this place and restore it. A church from the late 1800's is a rarity and I am sure this was an important part of county and area history at one point. Anyway....

Once I got headed East I suddenly became aware that I had a fair amount of tailwind. Hmm....I thought the wind was out of the Northwest today. Guess it was mostly out of the West in reality, because I was definitely feeling it going East!

I was thinking about a route I would take someone on new to the area if I had the chance and so I darted down a mile on Moline Road and then East on Gresham to go by the German cemetery on the South side of the road. Then South on Sage Road to catch the Bennington School House and the rural church a mile south of there.

And besides, I needed to keep the time in mind as I was planning on being home in time for lunch! So, as it was after 11:00am by the time I was headed South, I had to keep the pedals going around. I only stopped once, briefly for a nature break, and then I was back on it all the way to the house.

I was super-thankful for the day and to be able to ride out there. The winds were nothing to worry about and the roads were great. Everybody I met in a car or truck waved back. It just couldn't get a whole lot better than it was on Sunday.