NOTE: Okay folks, if you haven't been around long enough here to know what a "Randomonium" post is, then here is the deal. I ramble, rant, and randomly moan about all things cycling in one, incohesive, bizarre post. "Randomonium", okay? (Although it could be argued that today's post is more about gravel stuff than anything resembling 'randomness'.) 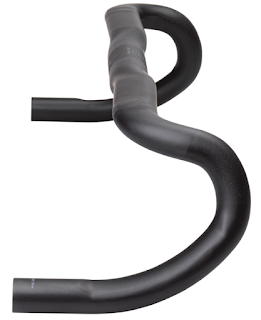 Wednesday of this past week we found out about the new Whiskey Parts Co. Spanos drop bar. It is carbon fiber with a flattened tops section for comfort and a unique compound flare in the drops section.

The bar will be offered in 40cm, 42cm, 44cm, 46cm, and 48cm widths and will cost $280.00USD. The unique compound flare is 12° at the brake hoods mounting area but then kicks out to a 20° flare below that for greater rider control and wrist clearance.

Comments: This is a prime example of using carbon fiber to its best benefits. Metal forming would not allow for such complex shapes and tight radius bends which the Spanos Bar has. Yes, carbon fiber can be light, but to my mind, that particular characteristic of carbon fiber componentry has been too oft relied upon to sell stuff made from it. Using carbon fiber to do what metal cannot do, or do very well? That, to my mind, is more interesting for the average cyclist.

The lay-up of carbon can also be exploited to provide vibration damping benefits as well, or maybe stiffness is desired? Carbon can be made to be that as well and that doesn't necessarily mean lightweight. If the weight is competitive with aluminum, or slightly lighter, I'm of the mind that - as long as the other benefits are exploited - a carbon component can be worth the extra expense. 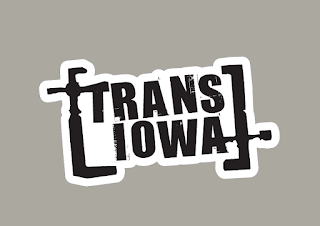 Some Updates On The Trans Iowa Book Of Tales & More:

So, this idea is being discussed more and different people are seemingly interested in being a part of things. This on the one hand, is helpful. On the other, it complicates things as I am going to have to pick a direction, (and therefore people) to go in before any real work gets done.

The basic idea as of now is to do a Patreon, which is a way to generate income for the project while allowing folks the opportunity to see some of the interviews and listen to audio which hopefully will be a part of the 'fact finding' for the book. Benefits other than that would be determined at a later point, but special T.I. commemorative t's, art, stickers, or such stuff might be a part of this.

I also was surprised by a request to look at a website project which was made by a former T.I. rider as a way to gather the pertinent stuff from the historical blog and the old T.I. site into one place with updated functionality and looks. This came out of left field and I was not expecting anything along these lines to occur now.

So, this actually may become a thing. There are a few tweaks and some details to work through, but I think once it happens, it will be a nice site to show folks and those of you who had done Trans Iowa should enjoy it. It is a heck of a lot better than anything I would have ever done! Stay tuned on that for now....

So, besides the new site idea and how I may use Patreon I am planning on getting the ball rolling this Fall on this idea and as things get on I will give periodic updates here. Perhaps that may migrate to the site I was shown, perhaps that may end up elsewhere, but for now, just tuck that in your hat if you are interested and keep your eyes peeled here for further announcements.

Earlier last week Gravel Worlds announced that one of its folks, Jason Strobehn, had become full-time on the event and that the event name, "Gravel Worlds" was now an officially recognized trade mark in the United States.

Comments: Whoa! Now back when we were dinking around putting on these 'events' for like-minded gravel freaks, no one in their right mind saw this coming. I mean not one person. It was the furthest thing from anyone's mind, with the possible exception of Jim Cummings of the Dirty Kanza. He was a bit more 'promotionally minded' than many of us ever were.

So, now I guess no one else can say 'gravel worlds' in their event marketing. That's kind of interesting, when you think about that. On the one hand it sounds all anti-grassroots, but it keeps others from grabbing that and running with it too, so the guys behind Gravel Worlds can kind of steer that any which way they want to in the future. It'll be interesting to see where it goes from here, but in my humble opinion, that event has already turned the corner and is one of the 'big productions' going forward. 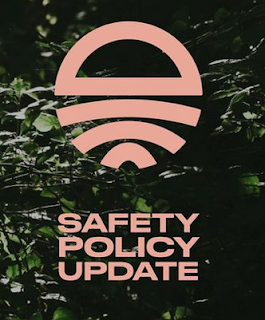 Mid-South To Require Proof Of COVID Vaccination For '22 Event:

Friday it was revealed that a decision to require everyone attending and riding in the Mid-South gravel event to have a proof of vaccination for the COVID-19 virus was being implemented. This was communicated via their website and on their social media.

"We will ask everyone to present proof of vaccination or a negative COVID-19 test taken within 72 hours of arrival to the event at check in."

Many people commented positively on the announcement; however, a few were wondering why there would not be testing for everyone regardless of vaccination status since vaccinated people can still contract and shed virus, (albeit those 'breakthrough' cases are statistically quite low according to most experts.)

Comments: The Mid-South was arguably the last 'pre-COVID' ran gravel event, although it probably falls within the COVID era in reality. Some commenters were critical of that decision to run the event in mid-March of 2020. So, it stands to reason that the Mid-South organizers would be, perhaps, a bit more on the conservative side this time.

As far as making everyone attending the Mid-South take a COVID test? I see the validity in that, but practically speaking, it would be difficult to enact such a measure. Besides, it would likely cause the event entry price to be raised significantly. On the other hand, it probably would be the fairest, most safe way to do a big event like Mid-South.

But with sporting events, concerts, and colleges not doing anything- for the most part - does any of this end up mattering? That's not a question I have an answer for, but upon first glance, the whole "we're wide open vs we're testing/requiring proof" scene is baffling and it would seem that everyone is pretty much on their own in terms of taking risks. I'm not sure a proof of vaccination does anything to reduce risks other than to those who are vaccinated 'if' they contract the virus at Mid-South, or on the way to and back from there. Presumably you won't be welcome, and will not go, if you are a vaccine hold-out. Those unvaccinated people who live there? Pfft! I don't have an answer.

That's a wrap for this Randomonium. Thanks for reading!

#1 I am all about those Whisky bars. I rocked those AL Bontrager Aero bars on my Twin Six FSU and a few folks made fun of me. One those people was MJ. MJ made a quick quip, the 3 minutes later an apologized, and was like dude you are not o something, that flat section gives your hand a complete different feel than another round section. Once he said that, I knew I was to something, so all my gravel bikes have had aero bars, now someone has flair, and now I am intrigued.
#2 Proof of Vaccination for Mid-South. Well, I wish them well, and I hope they have the success they are looking for.