With the end of the Level B dirt road section on 110th, I was now taking a right hand turn to go North to finish off circumnavigating Black Hawk County.  This road turned into Grundy Road, the Black Hawk County border, within about a mile. So it would be straight up this for thirteen miles before I would turn left on Ridgeway.

I tried to count off ten miles to get me to my first rest stop, but with a few sections not having gravel crossings at every mile, and with Black Hawk Creek cutting across my path, I lost count and I ended up going to a point seven miles up the road and resting by the bridge. Then I got back on and saw something that gave me a bit of concern. A "Road Closed Ahead" sign!

I decided to forge ahead and see if I could finagle my way around or through whatever it was that was going on out here. I then vaguely recalled that some development for a warehouse or something was happening out this way, but I don't recall the details anymore. Whatever! I made it through, although it looks as though we stand to lose several miles of gravel due to whatever is happening out there.

Now I was at Ridgeway, a busy section of paved road due to its connections and proximity to HWY20, and I had pretty much run out of gas again. I needed a rest stop, but not at that insanely busy corner with cars and trucks rushing by. I needed to go one mile West to take in the 'notch' in Black Hawk County's border with Grundy County. Then I rode about a half mile North and took another break. My legs were shot by this point. Resting helped, but after six to seven miles, I felt my legs screaming and they were weak. So, another six or so miles later, I stopped near the intersection with Beaver Valley Road. 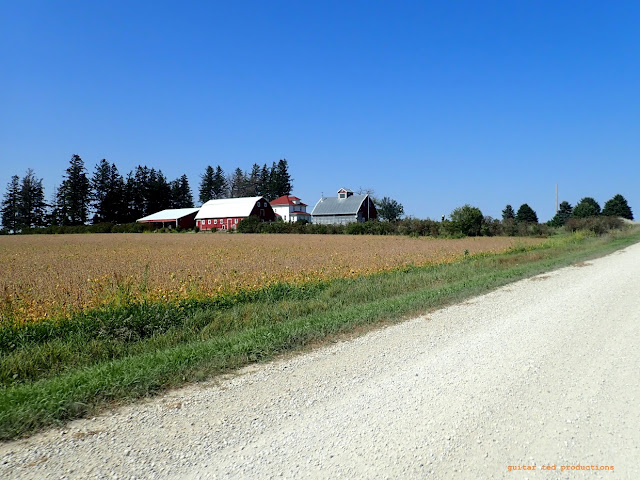 I was having to stop more than I wanted to, and the temptation to take a nap was overwhelming, but I didn't do that. I resisted as best I could. I had come this far and I was going to push through, no matter what. Eating some pretzels didn't seem to help at this juncture. Water wasn't a concern. I had plenty right up until the last miles. Fortunately, I never cramped, but I was tired. Really tired!

And even though I was stopping more, I still had 'time in the bank' too. I was going to probably come in well ahead of 5:00pm, so I could take my time here and just do what I could in smaller chunks. It was tough to accept that I had so few miles to knock out but I did not have the energy to attack it and knock them out in one sitting anymore.

At one point,after dragging myself off the grassy ditch, I saw two cyclists approach me on fat bikes. I gave a wave and they returned it, but they turned to head East down some pavement and never did go by me. Probably a good thing. I was not in any condition for cheery conversations just then!

Off up another hill and now through Finchford, which seemed desolate. I had to stop for a 'nature break' on the West Fork road, but soon I was off again and up into Bremer County as I had to navigate around the Shell Rock River. I reached a corner, just down from a picturesque farm, and threw myself into the grass. I was spent. Down the road, at the farm, a dog was going berserk because of my presence.

Finally I said out loud to the dog,(but of course, the dog could not hear me), "Okay, okay! I'm going to move on!", as if this dog was urging me on to finish. I actually trudged up the road about a quarter of a mile by foot, pushing my bicycle. I figured moving was better than sitting, or worse, sleeping. Finally I shook myself to my senses thinking that it was madness to walk when I had a perfectly good biccyle to ride. So, I mounted up.

There was something that happened right then. I have heard it described as 'the horse smelling the barn'. The sense that I was almost there conjured up every last bit of power I had and I completed the ride without stopping from that point. It didn't even really hurt that much!

I rolled in with a time of ten hours, twenty minutes for the 112.1 mile route. The circumnavigation of Black Hawk County was complete! It was ten after four in the afternoon. (Note- I started at 5:50am) So, I beat my goal and despite a not very pretty end, I was finished.

I know that is not very 'fast' as racers could probably do this route in far less than ten hours, but that wasn't the point. I was not out for a race. I was out for the challenge and the idea of riding 'around' the county by bicycle. Did it live up to my 'death ride' ideals? Totally. I felt completely 100% spent afterward. So, in terms of my goals and desires for this ride, it was 100% success.

Thank you for putting up with this tale this week. Tomorrow I return with my traditional 'FN&V'.

Way to tough it out. Reminds me of our races around he county on road bikes.

Great work Mark! It was fun following along on your route!