The press release stated that McElveen will contest the recently announced Life Time Fitness "Gran Prix", a six event series with three gravel and three endurance MTB events on tap. McElveen will join Allied's Colin Strickland, also a winner of a few major gravel events, on the Allied roster. McElveen will also be riding a "slew of other events and adventure rides" during the coming months of 2022.

Terms of the deal were not specified in the press release.

Comments: With big series, big events, and all sporting big payouts for top placements, it only makes sense that smaller brands and the top prospects in gravel would start forming alliances. The brands, like Allied, need the exposure in the field of gravel racing, and the athletes need the support to cover the entry fees and, perhaps more, to get to the bigger events with a possibility of making some money.

Interestingly, McElveen, who had been signed as an athlete with Trek Bikes, is leaving that deal behind to become a player in the gravel scene. Obviously, this Life Time series, with its three MTB events, places McElveen in a good place to become a major player to win it all. Allied looks to leverage his abilities and McElveen's social media, podcast, and adventuring to boost its brand in the gravel category. (And- as was reporeted in last week's "FN&V", Life Time is getting some play on McElveen's socials) On the flip side, Trek, (and other major brands) may be holding off on the Life Time thing to see if they can get involved in the USAC/UCI Pro Gravel Tour announced this past weekend.

Ten years ago, the thought of talented, young, and well known cyclist being sponsored for "gravel. MTB, and adventure" riding was not even on the radar. Now, getting these same talents to stick with bigger brands and ride either MTB or road is becoming something of an anachronism. This seems to be the trend now though. Who'da thunk it? Then again- with the big announcement of World Pro Tour Gravel and a "Gravel Worlds", will this sort of thing with unsanctioned events shrink in importance?

Speaking of "Who'da Thunk It?":

Tuesday of this week a big announcement was made concerning a "Gravel Cycling Hall of Fame". That's correct- a hall of fame for gravel cycling.

And yes, you can nominate people. There is a rumor flying around that your's truly is going to be nominated. Yep! Crazy to even consider that from my perspective.

Here's a bit from the press release for y'all to consider:

"“It is the community of riders that make gravel cycling so special, so we’re excited to present an opportunity for that community to lift up and celebrate the people who have led the way,” said Gravel Cycling Hall of Fame advisory board member LeLan Dains.

Nominations for the Gravel Cycling Hall of Fame will be open to the public and anyone will be able to submit a nomination with the permission of the nominee. Submissions will be accepted January 11 through March 1, 2022. Six categories have been established to serve as a guide for the types of riders and community members who should be considered for nomination (some nominees may fall into more than one category) and include: Promoters, Athletes, Innovators, Volunteers, Routeurs, and Storytellers.

Once all submissions are reviewed, an election committee of more than thirty cycling industry and media representatives, event organizers, and gravel enthusiasts will make the final selections on inductees. The first class of Gravel Cycling Hall of Fame will be announced April 4, 2022, and
then inducted at the inaugural banquet in Emporia, Kansas prior to Unbound Gravel 2022."

Comments: First off- I am not being allowed to be on the committee because the GCHoF folks tell me that they think I've got a pretty strong chance at being nominated and so they thought that this would be a bit of a conflict of interest if I was involved in the selection committee.

Secondly, I'll be completely honest- I never thought about a hall of fame for gravel cycling or that I would EVER be a part of one. I know that some of you think that I belong "up there with the first pioneers and greats" of this niche of cycling. However; whenever folks mentioned how they felt in that manner I just brushed it off as folks being nice to me. I NEVER thought that anything like a "Hall of Fame" for gravel freaks would be a thing. Not ever.... But- here we are.

Some have said that the idea is heinous, an insult, and worse. Some are now dredging back up all the negativity surrounding Emporia, Kansas and "The Event That Shall Not Be Named", saying that a HoF of gravel in that city is an affront to Native Americans and is a reminder of that 'racially insensitive' event name. (The Dirty Kanza, in case you are wondering what "that" name is) Some will say that the idea is ridiculous. Okay, I get that, but "history" is important too. Both what came before and what is now. We are at where we are at- may as well not deny the past and try to learn from it. Oh....and by the way, those throwing these stones aren't offering up alternatives. Yeah.....That'll work......

Some say that we don't need a HoF for an unsanctioned discipline of cycling. And anyway- we have a US Cycling HOF in California. Well, maybe we aren't sanctioned, but we do need a place to write the collective history. (You know, not everything in the MTB Hall of Fame happened under a "governing body"- right?)  And what of the MTB HoF and the US Cycling HoF? Why do we need that when we have a UCI Cycling HoF in Switzerland? (Ned Overend, Major Taylor, and Greg LeMond are members of that one, by the way) And gravel cycling is not just a US phenomenon. I suspect, (and hope that) members and events held outside of the US become a part of the GCHoF.

Some say  the GCHoF is "self-congratulatory". Well, is there a Hall of Fame that isn't? It's kind of the point- To celebrate and congratulate those that were deemed indispensable to, contributed greatly to, or have had great accomplishments in a movement, cause, or sport. This is almost always done by a panel of peers. So, thanks "Captain Obvious" for that criticism.

I also think the tradition of "grassroots gravel" has a story to tell, and unless it gets a place to be told, (the hall of fame), then it is going to get lost, run roughshod by what is coming down the pike in terms of the "$pirit of Corporate Gravel®. Then no one will be able to tell you that what happens going forward is not how it began, because people will remember what they want to, until you remind them of the past. That's why any "Hall of Fame" should exist. Not so much for "glorifying personalities".

But yeah.....there will be people lifted up by this hall of fame. If I am one of them, okay...... I don't get to determine what others think about me. That's your job. If y'all say, "GT should be in the Gravel Cycling Hall of Fame", then I will be there. If not- I won't be. The existence of the GCHoF is fine by me but I was okay without it as well. I've no idea how it will turn out. It could be a good thing, or.....?  Time will tell.

I'll ride my bicycles down gravel roads either way.

Link to "The Spokesman Podcast" where I discuss the HoF and more with host, Carlton Reid.

Link to "Gravel Guru" video where LeLan Dains of the GCHoF drops by to explain things.

Got someone in mind that you think should "be in there"? Here's the link to the site. 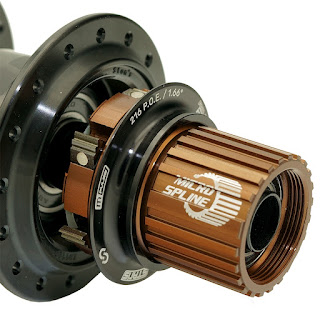 Magnets. They are in everything these days. Especially those crazy-powerful Neodymium magnets. Well, now they are available inside Stan's NoTubes "MPulse Hubs".

Another advantage is that when the hub is in coasting mode, the distance that is created between the pawls and the drive ring means the magnetic field has less pull, and so there is less 'drag' than a steel sprung pawl would have meaning freer coasting.

But, of course, to get this you have to buy a Stan's MPulse equipped wheel set, or......

You could go to the originator of this technology found in the MPulse hubs, Project 321, and buy separate hubs to build up your own wheel set. They even do a single speed cassette hub with this design.

That's it for this week's "FN&V"! Have a great weekend!