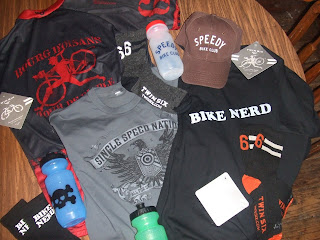 For Immediate Release
Waterloo, IA December 27th, 2007: In a stunning move, Twin Six, the Minneapolis Minnesota based clothing and accessory company, has made the decision to sponsor a web based media person known only as "Guitar Ted".
Although little is known about the details of the sponsorship package, it is reported that Twin Six has agreed to clothe the shadowy, endomorphic figure of this little known media scribe in it's finest assortment of in house designed t-shirts, jerseys, and socks. It is also rumored that some of the fine accessories available from Twin Six were also part of the deal.
A quick, informal poll of important industry media people turned up little solid information on the corpulent figure with the strange musical instrument name. One scribe, who asked to remain anonymous, was quoted as saying, "I can't figure this out. I think I saw this Guitar Ted guy once at Interbike in the media center. He was wearing a Twin Six t-shirt anyway, and he was scruffy looking- all hunched over a Mac notebook computer typing with one finger. I mean......there is no way he's a serious media guy!"
A similar response was garnered from several athletes we contacted. One common response we gathered was "...he's fat and slow...." Many had never heard of Guitar Ted, and we are doing our best to bring you any information we can to help explain this stunning and strange move by Twin Six.
My deepest thanks to Twin Six for the most generous way they have treated me in 2007 and for these threads and accessories. I'll wear 'em with pride and get 'em dirty at several events in 2008.
Posted by Guitar Ted at 6:53 AM