Well.......by now if you have gotten this far you are either clicking to your next blog or you already know about parts I - IV. (And if you don't, you'll just have to search for those. I ain't linkin' 'em no more!)

Now we're into the time of the year that would have normally found me winding things down a bit. Post RAGBRAI things at the shop generally slow down to a trickle. Well, not this year. I found myself nearly as busy doing repairs as I had previous to RAGBRAI, and all still without the assistance of a second mechanic. Then I got the crazy idea to answer a call put out by The Blue Colnago to join a single speed specific 12 hour team for the Iowa 24.

Well, why not? Being insanely busy was a way of life in 2007, why stop it now? So, having not pinned a number on since the Dirty Kanza 200 in 2006 and probably ten years since I last raced any XC venue I decided to join ranks with Team Stoopid. All I had to do was ride one of my single speeds and complete what? Two to three laps? Heck, a monkey could do that! 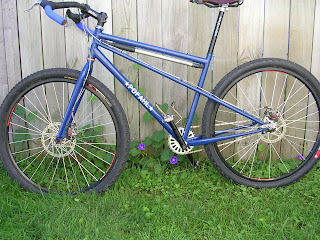 <===The Pofahl Custom wasn't quite ready for the Iowa 24 action, but it sure was sweet!

I had the new Pofahl SS, but only just, and of course, even though I was sorely out of "racin' shape" I knew that you should never, ever ride a brand new rig in a race. So this fine new addition to the Guitar Ted Stable was passed over in favor of the On One Inbred. I started riding it everywhere. I figured that even though I wasn't really in shape to do a race, at least I would feel comfortable with my bike choice. As the event drew near, I got kind of excited about going to an event again and seeing how things had/had not changed since I last lined up with a bunch o crazies. 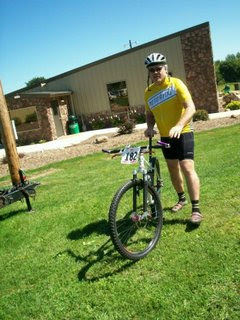 <===Guitar Ted striking fear in the hearts of skinny XC whippets. Large and in Charge, Baby!

Well, needless to say that the endurance/24/12 hour thing is a far cry from the rooster strutting that I was remebering from back in the day. I had a great time, Team Stoopid won our category, (We were the only entries in it! Hey! It's race strategy that works!) I had a few beers, sipped some whiskey, and had a nice chat or two with some like minded folks that were hanging about the place.

Thanks to all who attended that little gig, I think I'll be expanding my race calendar for next season, but that's another post!

After all the fun and games I went home and started prepping for the Big One. The Interbike trade show that I was to cover for Twenty Nine Inches. I had appointments to line up, stories to research, and bags to pack. I was even going to the Outdoor Demo this time. That was cool! So, I spent alot of evenings at home e-mailing and strategizing. Work was a touch less busy, but we still had daily repair schedules that were full leading right up to when I left. Busy.......the operative word for 2007 you could say. 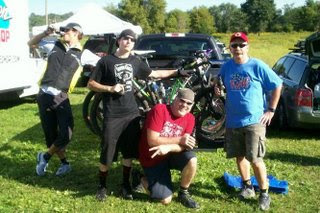 <=====Team Stoopid would like to take this oportunity to wish you a Merry Christmas and a Happy New Year!

That will end todays rearview. Next I will cover the Interbike trip itself, which will probably be its own post, and then we'll wrap things up with a final Rearview of 2007.

Then it'll be time to peek into the future. Stay tuned!
Posted by Guitar Ted at 6:49 AM