Welcome to Part IV of The Rearview of 2007 here at Guitar Ted Productions. If you need to catch up, here are the links to the previous parts.

Now after the Big Wheeled Ballyhoo was over I thought I would have a bit of time to relax and not sweat three things going on at once. Well, thinking that things will be one way and actually having them turn out that way are often time two different things. Call it Murphy's Law if you will, but a "wrench" got thrown into those plans right off the bat! You see, after Mr 24 left the shop the boss hired another mechanic. Well, he quit right at the beginning of July. Not good! Not good at all.

The thing is, in Iowa you are going to be busting your butt at about this time for people getting ready to go on RAGBRAI, the ritual summer festivity here in these parts that takes place on the last full week of July. If you work as a wrench in a bike shop, you know what I mean. Well, not only did we lose our second mechanic, we also were scheduled to be an overnight stop on the RAGBRAI route, which meant even more folks wanted their bike for the ride.

So I had to buckle down and do the amount of repairs that Mr. 24 and I used to do together in a day. That meant I had my nose to the grindstone five days a week for three weeks straight. It was a successful run, and I did it, but it was draining and left no energy for other activities. 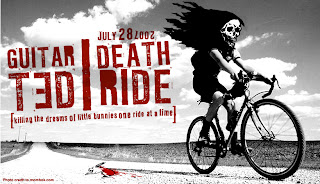 That included getting ready for my second Guitar Ted Death Ride Invitational. That thankfully was taken over by an interested person by the name of David Pals, or d.p., as I often refer to him as here. d.p. was kind enough to take on all of the route finding, cue sheet work, and logistics for the GTDRI this past summer and let me tell you- The Death Ride woulda been cancelled if not for him! There was no way I could have done it this past summer. We did have to decide to switch the date to early August though, due to a scheduling snafu on my part. I also only got in one gravel ride previous to the GTDRI and that was a recon of the course with d.p. Well..........I suppose you cold count my July 4th debacle. I was going out for my first long gravel grinder that day and on a nature break I took a miss step into a ditch and tweaked out my knee! Not good! I recovered, but no long gravel grinders like last year when I had done several hundred miles of gravel riding previous to the GTDRI.

The day finally came for the ride and I got there pretty much as a spectator since d.p. had handled all the detail work. You can read a detailed accounting of the event here, if you care to. I will only say that it was a great time and a relief from a year of craziness up to that point. We had to cut a bit of the original loop off due to inclement weather, so we tentatively planned a fall ride to do the whole route and get a sense of completion. Hmm.....another ride? Well, at least this fall ride would be a piece of cake to plan since d.p. had it all in the bag already!

Next up: My return to racing and the lead up to the craziness that is Interbike. Stay tuned!
Posted by Guitar Ted at 6:35 AM