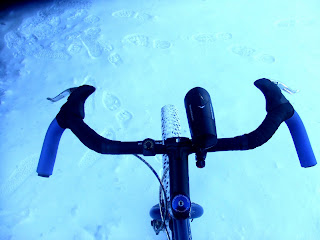 <==The View: Lots of blindingly white terrain on the commute lately. This is just outside the back door of the shop.

The commute to work has been totally transformed of late. The weekend ice got rained on, then snowed on effectively laying down a crust so strong and tacky that it's like running your bike on a nicely groomed trail. Well........it's almost like that!

There still are the streets, the parking lots, and the patches of open glare ice that are a bit sketchy. I just aired down the tires and went for it. I really, really try to avoid the studded tires at all costs because they roll so terribly slow. I just can not bring my self to mount those pigs up.

Notice the light. It is the Blackburn Voyager 4. Gotta have it on now after work if it is overcast. It gets really dark at 4:00pm now if the sun is obscured from view. 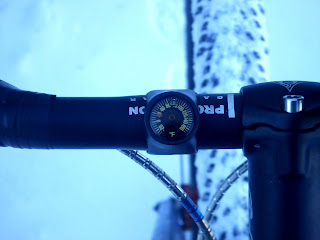 Yes, the commutes have been chilly of late too. This is waaaaay too early for the really cold stuff to come. We get close to 30 degrees in the afternoons, so at least the ride home is better.

I just hope it either stays this cold or that it warms up enough to melt this crap off. In between will ruin the nice crust and make the ride even slower. I can traverse the snow plowed piles right now as if I'm going up over rocks. This is very unusual since your generally have to dismount and walk over that type of frozen snow. It usually is the consistency of thick mud. Not ride able. I like it this way far better! 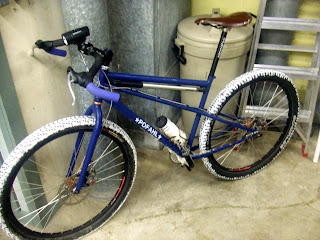 <===The "melt area" inside the shop where we leave our commuters to shed the days grime, grit, and frozen crap.

The tires I'm riding now are perfect for the conditions. The Schwalbe Racing Ralph is so compliant that it follows irregularities in the icy surface like foot prints and ruts giving me Velcro like traction in the rear. Up front the proven WTB WeirWolf LT is very grippy too. The casing is a bit stiffer though. The Ralph is bouncy and a bit squirmy at 25psi. I think off road low pressure for this tire and my weight is going to be closer to 30psi. In contrast I can comfortably run a WeirWolf at the low 20's in the rear and slightly below 20 psi in front. After riding this Ralph I wouldn't dream of going lower in back and I think 25psi front will be the bottom end for this tire off road.

It'll be awhile before that happens though. It looks as if more snow is coming, so off road riding will probably be replaced by XC skiing, if the predictions com true for us. We'll see. For now I'll have one more day of fun snow commuting at least. I better enjoy it!
Posted by Guitar Ted at 6:46 AM