Time again to move forward with the rearward view! Part three of my year end retrospective on what has been happening here at Guitar Ted Productions is here. Check out Part I and Part II if you missed them.

Post Trans Iowa V3 was spent getting settled back into a groove at work. Mr 24 who had been my co-worker for nearly five years and co-conspirator on all the Trans Iowas was moving on to Ergon to pimp the green. He never really indicated that he would not be working with me anymore at that time, but I knew we had worked side by side for the last time. I hated to see him go because I have never had so much fun working with someone before in my life. On the other hand, it was fantastic to see him get what he had worked so hard to achieve and I am not the only one that thinks so. In the end I am very happy for him. No one deserves it more than he.

So, with the shop down to effectively one mechanic going into the busiest time of the season, I had to buckle down and everyday was a slog. Top that with getting ready for the Big Wheeled Ballyhoo and I wasn't getting a whole lot of riding done. The Ballyhoo was an idea concocted on the fly. It all started with a suggestion that we hold a 29"er meet-up here in the Mid-West. I based the idea off of George Wissel's "Meat Up" that he held in Vermont. I was thinking low key. Just hangin' out with maybe 20 other guys and riding. Drinking and eating, just like George's idea.

Well, one thing led to another quickly. Before I knew it, I had companies wanting in and my Crooked Cog Network leader wanting to make it a part of Twenty Nine Inches. I had been steadily writing for that site since the beginning of the year and things were taking off on that end too. More stuff was hitting Guitar Ted Productions door for testing, so I was having that to do as well.

At any rate, the Ballyhoo wasn't really officially "on" until March and we were going for a June date! Added to this the fact that Tim Grahl and I were the point men and we had absolutely zero experience in putting on any festival and you can see the lunacy in this plan. 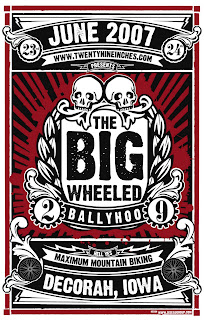 Well, as the days approached for the festival we were sweating details and wondering about the turnout. Weather was a concern and it rained heavily before the event. The sun only was forecast to be out in fitful bursts throughout the weekend. It was what it was, and we went forwards anyway.

As it turned out, we were sorely disappointed in the turnout. We didn't get anywhere near what we had hoped for in terms of numbers. Tim and I felt like we had let a lot of people down. We did get some encouraging words from the manufacturers present that were showing bikes. We got some raves from those that did show up. We all had a pretty good time, I think. Well, good enough that we decided to get this up and running again for 2008. We are shooting for June 21st and 22nd as the dates this time. We'll see if we can put together a better promotional package and get more folks out this time. But this isn't about the future! Back to the "rearview"!

I must say that through all of that experience Tim and I were so blown away by the people involved behind the scenes. People like Rich Gosen, Jeff O'Gara, All the Decorah Parks and Recreation folks, T-Bocks Bar and Grill, Decorah Bicycles guys, all the guys and gals at Salsa Cycles, Gary Fisher Bikes, Raleigh Bicycles, Niner Bikes, Titus Bikes , SlingShot Bikes , and all the other companies that showed bicycles. We were surprised that anybody like this wanted to be a part of the Ballyhoo. Thanks!

That takes us up through June. If the first part of the year sounded busy, you ain't seen nothin' yet! I had the Guitar Ted Death Ride yet to do, Interbike, and a whole bunch o repairs for RAGBRAI. Stay tuned for part IV !
Posted by Guitar Ted at 6:44 AM