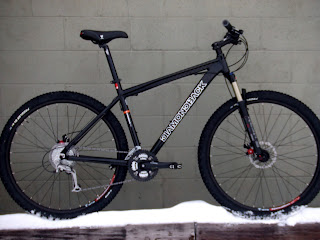 <===The Diamondback Overdrive Pro arrived for testing and review. Look for that on Twenty Nine Inches.
Tiny Rotors on the Front of 29"ers: Mini rant here. This thing that bugs me about the size of rotor on the front of most stock 29"ers might seem trivial. However; I just feel that a 185mm rotor should be a minimum front rotor size on a 29"er for increased stopping power. Of course, you would have to actually use your front brake, which is another rant in itself. So, please.....if you are working for a fork manufacturer, or spec'ing 29"ers, could you please think about recommending/spec'ing 185mm rotors on the front ends of 29"ers. It works so much better than 160mm do up there.
Snow riding is Great! Snow riding Sucks! This is the mental monologue that ran through my head as I rode yesterday. Just about every 30-50 feet or so it would change. I'd get rolling along, things would be looking great, then swoosh! The snow would let go, being softened by temperatures near the freezing mark lately. Or it would be a thin, bumpy line where people had walked. When you are up on it, life is grand, then you get knocked offline into the mush. Dead stop.........walking now. I think I maxed the heart rate several times on my trips around town running errands. At one point, after unlocking my bike in front of Hy-Vee (to the bemusement of most customers) I stood up and about blacked out. Guess I should have been using my training nutrition protocol, instead of not doing anything. Hey! I was just riding around town. That would have been rich. Man down because he hasn't refueled. Lying down in front of a grocery store!
Is there an Ice Cross in my future? I don't know, but The Blue Colnago mentioned it, so I figured I better be ready. You know.........just in case. So I have this really old Raleigh Grand Prix. The model with cottered cranks and Simplex plastic-fantastic stuff for drive train gear. Anywho, I found out that by switching out the 27 inch wheels for 700c equipped with Innova studded tires I can rage the ice. Sweet! Now I also found out some other things riding it yesterday, which will get addressed soon. Slipping seat post, bad rear cassette,( may go single speed) handle bar tweak, and some real bar tape instead of that plastic stuff color coded to the frame paint. Oh yeah, the fine safety levers may have to go to, but they might be kinda cool as an anti-cross lever statement. Hmm......... Well, whatever, it's a work in progress, it's cheap, and I don't have to worry about it failing, or getting ripped off. If we have an Ice Cross, it'll be cool to ride this and have a beer afterwards. If not.........I can still have the beer, right?
Have a great weekend! Ski, snow shoe, hike, or ride your bike.......if you can!
Posted by Guitar Ted at 6:46 AM