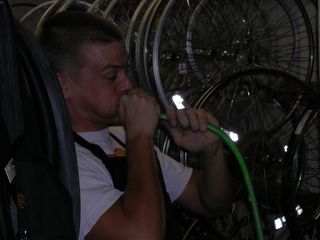 I think the "aliens" have gotten to Jeff! I caught him using this "bong" device today that is filled with this weird substance!
Guitar Ted Productions

Europa Cycle and Ski is a really weird place! I think Jeff has been abducted by aliens or something! I caught him on camera today taking this bong hit of this really weird green goo! He was actually inhaling it!!! I made him confess later, and he admitted that it was just something that was no big deal. He said that someday, we would all understand and that "we" are not ready for them yet. (????!!!) Yeah! How messed up is that! I know one thing, if he wins at the 24hrs of 9 mile this weekend, we'll all know why! Oh well, at least he isn't acting any weirder than normal. Ha!
Posted by Guitar Ted at 9:52 PM