More Tails From The Shop! II 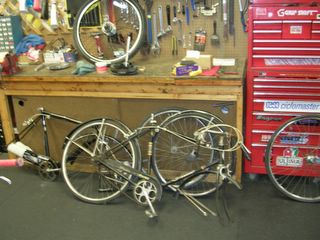 The area of the shop known as "The Swirling Vortex of Misfit Bikes" in full "suck" mode!
Guitar Ted Productions

The madness continues unabaited as the season careens headlong into it's frenzied climax, known by the foul acronym of ragbrai. Hundreds of two wheeled contraptions to be repaired so that the so called cyclists can imbibe in their chosen poison. Alchohol, tobacco products, and other possibly illegal substances,(allegedly!), are to be consumed en-masse with the bicycle being used only as a means to an end, which for some may be coming sooner than later! (The end, that is)

Today's featured pics portray the two facets of the day's craziness most prominently displayed. Customer relations, as shown by Mr.24, below, and the ever mounting piles of junk that seem to be sprouting up around the shop like weeds in a summer garden. Too bad they don't make a "Round-up" type product for this menace. That'd be great! Spray on the pile of trash, and it withers away and dies! Awesome!

While it is apparent that I hold the cycling event held at the end of July in this state with some disdain, (Okay- alot of disdain!) There are those that are reasonably pure in their efforts. I acknowledge you with a tip of my cycling helmet. The courage you display by associating with the debased cycling hordes that surround you is admirable. I also will join forces with you in a gallant showing of true cycling for a day. July 28th to be exact. A ride report will follow!

Well, it's time to replenish my diminished energy reserves! Later!
Posted by Guitar Ted at 5:59 PM