More Tails From The Shop! 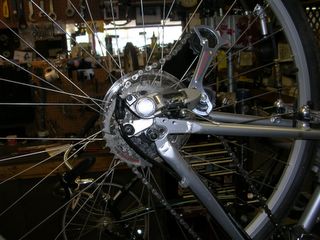 This pretty much sums up how the days are going. Twisted, metal maelstrom!
Guitar Ted Productions

This is it. The time of the year in this lattitude that you either are busy beyond all belief, or you are checking the help wanted adds. We here in the Iowa bicycle shops have the added "bonus" of Ragbrai. ( The annual bachanalia of bikes traversing the state in a general west to east direction every last week of July) Things are heating up, business-wise, and attitude-wise. Let's take a sampling, shall we?

1. A great "JRA" story! JRA is an acronym for "...just riding along...." Usually followed by some responsibility absolving reasoning concocted, no doubt, in a pool of sweat the night before they arrive at the shop counter with their broken machinery. Okay? So, this individual has the ubiquitous left crank arm failure. Yeah, you know, the arm "just fell off" thing, with the inevitable distorted square taper that renders the ol' left arm useless. Well, I tried to explain that this was not uncommon. to which this person replies, "Well, in 8 years of riding bikes I've never had this happen before!" Ummm.....rrriggghhhtt! Once again, customer logic....it's a beautiful thang! You know, if he would have just said that he was angry, and that he thought that he shouldn't have to pay to have it fixed, I would have had some sympathy for him. But no, we have to delve into the jar of twisted logic and angry eyes! Whatever! He payed for the arm, and got the labor, missing crank bolt replaced, and the calmest demeanor I could muster for free!

2. Black Spokes: Are these things the absolute worst idea to come along, or what? A great customer buys a bike to get into commuting, which is awesome. More of you need to get into this! Anywho! She keeps getting broken non-driveside rear spokes. Weird! So, by now she is getting cold feet on the commute, thinking that she may not make it because her new bike is breaking all the time! AArrrgggh! This is definitely no good! All the while, this customer is just being real with me about it. No "JRA" crap, no twisted logic. Fortunately, I was able to get the whole wheel rebuilt using my fave Wheelsmith spokes, and more importantly, this customer back riding in a day! See how it works, be nice- very nice- and I will bend over backwards for ya! Oh, by the way, the whole thing was done gratis! The manufacturer even picked up the costs for us! Cool!

Not every story, or every customer for that matter, is one way or the other, as I have portrayed. It's just that some people really make things way harder than they have to be. Hey, we all have problems! It's how we handle 'em that cuts things one way or the other for us, ya know? Be Cool!
Posted by Guitar Ted at 8:30 PM

That is an awesome sculpture! It looks like a swan.