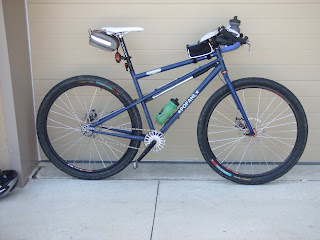 With Trans Iowa V4 in the books I can now turn my attention towards the Dirty Kanza 200. I guess I'd better! I have less than a month to get ready!

<===The "current state of affairs". The Pofahl being tested with some possible gear choices.

I have been fearing, to some degree. this event due to the fact that the winter training was nearly non-existent this year. Then Sea Otter and Trans Iowa ate up almost all of April, so I feel waaay under prepared physically for this event. The equipment situation is coming along pretty well. I narrowed things down to riding the Pofahl, but I am still setting it up and testing some ideas.

Mike Curiak calls it "thinkering", and I've been doing a lot of it lately. I know what I want to accomplish, I just don't know exactly what that is going to look like yet. So, that said, the image you see here will not be the set up I use at DK 200. There will be changes to this. I figure that with a couple of long slogs out training yet, I have a couple of chances to settle on the combo I'll actually use there.

So, I hope to at least be functional mechanically when I reach Emporia, Kansas later this month. The physical part? Well, that might be a little sketchy! We'll see.