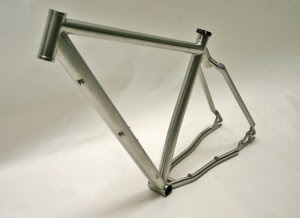 <===Titanium Inbred 29"er prototype. Coming soon to a trail near you.

I spend a lot of time scouring the inner-web-o-sphere for all the latest in 29"er stuff, so I've been noticing a marked uptick in titanium offerings. In some ways, I find it rather odd.

First off, these rigs all seem to be appearing at a time when the economy would seem to indicate that it's not the right time. You probably realize that titanium is a spendy frame material, (the Inbred here is rumored to be coming in at $1850.00 just for what you see there) With costs of living on the rise, a titanium frame introduction seems a bit more iffy right about now. Yet that doesn't seem to be stemming the flow of new frame offerings in the grayish metal one bit. I can think of at least four companies right off the top of my head......whoops! Make that five! ,......that have introduced, or announced plans for a new titanium frame in the last six months.

Then there is the "green" factor, which I haven't seen brought up in regards to titanium. With all of today's concerns about the environment, I am reminded of how enviromentally unfriendly refining titanium is. Titanium doesn't exist in nature as an element on it's own. It is intermingled with other elements that have to be refined out of the titanium using vast amounts of energy and some pretty nasty chemicals. Not the sort of backround any "greenies" would be proud of, I would think. But to be fair, steel, aluminum, and carbon fiber are no real gems in that regard either. Perhaps Calfee has it right and we should all be riding bamboo rigs, eh?

There are those, who over the course of the years, have touted certain "benefits" of titanium that I find amusing too. Like it's resistance to corrosion. Okay, fine. It resists corrosion. But how many of you out there have ridden the same steel bike that has rusted out from underneath you? Not many, I'm sure. Then you have to wonder, what about aluminum? Yeah, yeah....fatigue life, blah blah..... Again, I don't see mass evidence of aluminum frames breaking that would scare me into buying a titanium frame. At least not to the degree that it would overcome the cost barrier. Then you have the "it's the last frame you'll ever buy" arguement. Yeah...........right! Bikes are like Pringles, you can't just buy one!

Well, however it may be, we are going to be seeing a lot of new titanium bikes rolling out soon. And to be perfectly honest, some of them are just plain hot! I love the looks of some of these new rigs, and titanium is a great riding material. If you ever get a chance to ride one of the gray metal steeds, do it. You'll be amazed. Would I own one? You bet! And it may be sooner than later!