Wrenching, Prepping, and Other Goings On 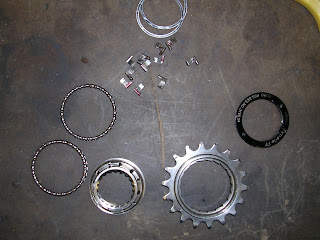 <====My ride with Matt Gersib earlier in April roached my freewheel!

I've been up to a lot of wrenching not only at work, but at home too. Getting all the testing arranged for parts and bikes. Swapping wheels, tires, and components. I'm only about halfway through the process!

One of the more frustrating things happened the other day when I pulled apart the freewheel that had frozen up as a result of my ride with Matt Gersib in mid April. The freewheel has six pawls and six springs inside which all can be removed. Well, one of the springs decided to take a flyer on me and dove into the parts washer at work. This parts washer has about six inches of nasty fluid in it with another inch and a half of dirty filthy silt at the bottom. As you can probably guess, I haven't ben able to come up with the spring yet!

There have been a lot of positives though. I got two bikes that were non-functional up and running last night, including the one with the frozen up freewheel. I swapped out wheelsets and swapped out gears on one and just wheel sets/tires on another with a saddle/seat post (or chair/chair post- right mw? Heh heh!) for good measure. 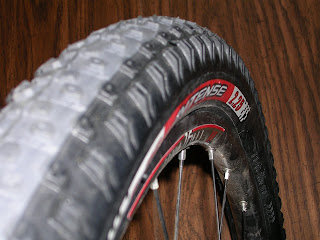 <===Tire testing requires setting up the product and choosing a bike suitable to the tire in question. Which bike will this end up on? Stay tuned!

I also made a chart of all the tires/wheels that I have to better co-ordinate the testing procedures and make sure I don't let anything slip through the cracks. I've got everything squared away now, so I should be ready when the weekend comes to start riding some stuff.

In other news around here, Captain Bob, (who is taking a short hiatus from blogging to ride) left me this link to some Trans Iowa pictures. There will be more coming, as Captain Bob isn't quite half way through his stash and my meager offerings yet. Thanks to Captain Bob for doing this! Some of the photos from T.I.V4 are pretty cool and amazing. I especially like that Captain Bob got not just the riders, but the roads, the skies, and some of the sights along the route. It gives you a teeny-weeny taste of what Trans Iowa is about, but a good one.

So, look for more T.I.V4 photos there and more reports on testing here, on Twenty Nine Inches, and on The Bike Lab real soon. I'll be busy, Captain Bob will be busy, and riding bicycles in the woods and on gravel roads will be getting done real soon here. Should be lots of fun!
Posted by Guitar Ted at 5:41 AM