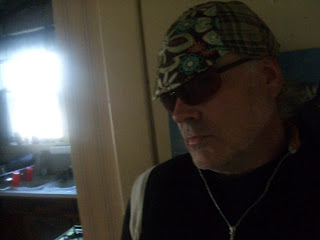 <===="We're on a mission from God"
Wow! That's my first reaction to my new Snappy Cap. This thing rocks!
Let me just say for the record that other cycling caps out there are really cool too, but I'm telling ya, the custom fit aspect here is what sets Snappy Caps off from the reat of the competitors.
That's what I was attracted to here mainly, as I stated in my earlier post. However, that isn't all there is to Snappy Caps. Of course there is the totally unique look, which I happen to like alot. There also is the construction of the cap. It isn't the usual three panel hat. The Snappy Cap has eight panels plus the bill, which is a heck of a lot more sewing, for one thing. The other thing is, it fits in a totally different way than any other cycling hat I've tried on. Actually, when I envisioned what I thought would make a great hat for myself, this is how I thought it should be done.
The bill is not too stiff, nor lifeless, and true to company name, it "snaps" up rather smartly without digging into your forehead. Nice touch there.
My Snappy Cap was a "Custom" made to measure option and cost $35.00 plus shipping. For that money you get some lattitude in choosing your look as well. "Standard" Snappy Caps come in at $30.00 plus shipping. There are usually some standard, (calling them "standard" is sooo understated. They are anything but that) choices in stock at the online store, so go take a look.
GTDRI Note: Just to let you all know, the site has been updated and you can go there for updates. I'll alert you all here too when news has appeared there. My next step is to drive the course, so I'll report back when I have accomplished that feat.
Posted by Guitar Ted at 5:51 AM