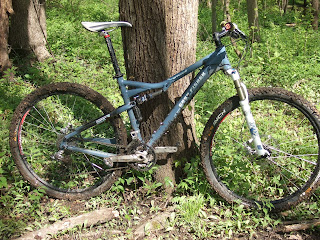 This weekend was going to be a tough one to squeeze a ride in because of Mrs. Guitar Ted's being on call at the hospital and Mother's Day. I figured I was pretty blessed to get an hour and a half of mountain biking in, ya know?

Anyway, it rained here again overnight on Saturday, so the trails were slop in more places than last week. Soupy sections were everywhere and after riding through, I examined them and I couldn't even tell I'd been through some of them. The slop just re-formed into one contiguous mass again after my passing. Weird! While it's not cool to do trail damage, this trail can't really be damaged in spots by riding it wet. It's kind of the nature of a riverside trail in these parts. That's not to say that the trails there can't be damaged though. There were parts I refused to ride because of this.

One newer "development" I hadn't been aware of is a new housing section at the "back end" of Ulrich (locals will know this park) that you will find if you cross over the creek and ride that little section. At the outermost curve of that trail there is signage for "Private Property". Umm......okay, you signed a ten foot section of trail that is overgrown with trees and underbrush. I suppose it's okay and the "right thing" not to encroach on someone's property, so I rode back thinking maybe I ought to re-route that section.

Well, with development comes other problems. Like kids on ATV's. Yeah, I found a section in the park proper where there had been ATV's ridden straight up the fall line from the creek to the main hiking trail and, I suppose, out onto the park road. (Although the ground is so firm on the hiking trail you can't see evidence of the ATV's passing) So, this sweet little downhill section that had never eroded before is now getting ravaged by the recent rains. The underbrush has actually been cut back widening the trail by about three feet. The section where the singletrack used to curve away from the hiking trail has been blocked off and a new cut through to the hiking trail has been made there. Nice! Now I don't feel quite so bad about riding ten feet of private property on singletrack leaving no evidence but the footprints of my Conti Mountain Kings.

Anyway, it chaps my hide even more because I'm the guy that put that trail in there in the first place. (With the help of Mr. 24, oddly enough) 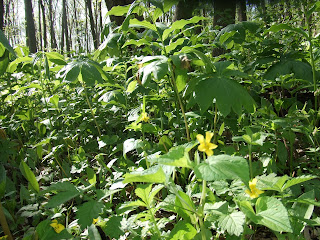 <===At least I found some new flowers to help forget the scars.

I continued on my ride, with a couple grinds up to the county blacktop and back for some extended climbing action, and found some new flowers blooming in the underbrush. I figured I'd bag as many flower shots as I can this year and see what I get. The flowers are just getting going out there, so not much to find yet. The Bluebells were on last weekend, but are already going away. Now it's these little yellow guys turn. They looked like stars in the underbrush as I wheeled on by.

Tomorrow I'm making an announcement on the Guitar Ted Death Ride Invitational so stay tuned!
Posted by Guitar Ted at 5:46 AM