Twenty-nine inch wheels have been around for awhile now and ever since the modern 29"er hit the scene in '99, (read more about that here and here), there has been talk of even bigger wheels. Of course, there are 36"ers, 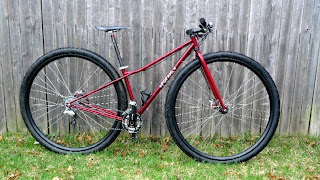 and they are awesomely big wheels. Ben Witt kindly loaned his to me to ride around on for awhile last year. The big red machine was cool, but not really well suited to single track in my mind. Not that you couldn't do it, because you can. The thing is, well....those wheels are not as refined as 29"ers are from a materials aspect. Given some high-dollar tech/engineering, yeah. Then you'd maybe have something that would be competitive with 29 inch wheels. As a concept for bigger guys though, it would be great. Think about some really well made tires, rims, and some mega-high flanged hubs so the spokes could be as short as possible. Maybe use a fatbike inspired 170mm O.L.D. rear hub, a 135 O.L.D. front hub,  and a 100mm wide bottom bracket. Get a dishless rear wheel, and bigger guys probably are not as sensitive to the dreaded "Q" factor. Hmm........could be fun!

<===WTB 29"er Dissent on the right. (Image from the Cleland Cycles site)

Now comes word of this fellow from the U.K. that has been tinkering with off road bicycles since the 60's. (Before Gary Fisher even! gasp!) His name is Geoff Apps and his bicycles go by the brand name of Cleland Cycles. He has a very unique take on the offroad bicycle, but besides this, he has found his big wheel size in the old English 28" X 1 1/2" size used on old rod braked Raleighs, for one thing. The ISO bead diameter is 635mm, which compares to 622mm for the 29"er wheel. A touch larger diameter. Now with a wide tire mounted, as shown at left, you get a wheel that is 31" or so. Hmm.......

You have to wonder if this sort of thing will ever go anywhere, but with the nominal size increase over a 29"er, the experimentation and thoughts on possibilities for larger folks is intriguing. Weight will be more, but that wouldn't be a bad thing for bigger guys.

Anyway, it has been said that Ragley Bikes is making a 100 Cleland Adventurer type rigs soon. It would be cool if they could shoe-horn a few of these bigger wheels into a few of those, just so some folks could give it a whirl. I think it would be interesting to check out.
Posted by Guitar Ted at 1:00 AM

Thanks for your considered views; folks are saying the same about my machine as was said about mountain bikes when they first appeared.
Weight of bigger wheels; you just have to weigh the advantages over the penalties. I don't care much about weight, me. But the production bike will have to be lighter; it's not always easy to keep the weight down on a prototype.
BTW, I'm 5'-4" tall.
Cheers!

Not sure where the 31" comes from. At 635mm, the rim ISO bead diameter is only 13mm larger than the standard 29'er, making this a 29.5"er. Is this really different enough to bother with?

@Exhausted Auk:The overall diameter of tire + rim is what is considered here, so the 31" measurement is dependent upon what tire you mount on that rim. Same with 29"er wheels. It's the tire that makes the difference, otherwise it is just a standard 622 rim that road bikes use.(In the case of 29"ers)

This is the reason why anything previous to WTB's Nanoraptor in 1999 wasn't a 29"er.

We can't verify Mr. Apps measurement, but looking at that pic, it isn't hard to believe it could be true.

'Thirty and a halfer' doesn't have much of a ring to it, but 775er sounds better.

My original '29er' back in 1982/3 wasn't really a 29er, but the motivation inside my head was definitely 29er. It's was just that no suitable tyre existed then. If I'd enough dosh, I'd have had some made. But I didn't, so I had to leave it to someone else.

My view is that 29" is probably optimum; I haven't built the 775 wheels yet, waiting on a NuVinci N360 test hub to arrive, so I can't say yet if the extra diameter pay dividends.

Where would we be if idiots like me didn't continually push the boundaries.

@Geoff Apps: Well, I think calling yourself an "idiot" is a bit harsh. "Dreamer", "eccentric", "visionary", maybe better, but whatever....

Thanks for your comments here. I will be looking forward to that review with great interest.

My main point was that, for a given tyre width, the overall diameter only increases by 0.5" over a 29'er, which seems of limited value. Why not at least go to the 700A size (ISO diam = 642mm) instead of the 700B (635mm), or even come up with a new standard entirely, in order to get more of a distinction? With the 36'er already in existence, it seems that something more like 32-33" would fill the gap better?

@Exhausted Auk: Well, that's all easy to say, but actually putting your hand to a proper knobby tire and a proper rim?

Sometimes it is a matter of convenience/happenstance that things like, say, 559ISO bead tires get used for mountain biking in the late 70's, for instance.

Yes, it really is all about research; searching hour after hour on the net. You have to go with what's available unless you have the funds.

I'm just a penniless pensioner, so I have to marry what I want with what I can get.

These 31" wheels, interesting though they may be, are all compromise; but better than daydreaming.

Ah, now I understand! I had assumed these things must be custom made. Amazing that Geoff was able to find them at all!

I checked out the Cleland Cycles web site. Very interesting. I sure wish I'd had a machine like one of those for all the muddy West Dorset roughstuff I was led over during CTC rides when I was growing up in the late 70's. Maybe not quite as necessary now I live in Iowa.

Ehm, did those 31" tires just pre-exist? If so, why did we not know? Another case of sought for, but forgotten bike intel?
I knew about 635mm rims, same as 27" road rims, semi-recent those.

For larger frame road bikes, I totally believ ein larger hoops also, BTW. They'd need ~30mm tires to be rideable though. Say, 3" up in size over 700c. Same as I want for "regular" 32". Same as 29" with 2.3-2.4" fatties, just a larger rim. And most of the advancements Ted asks for 36", of course.
A lightweight road bike with such 698mm rims would in my expectations just ROLL. Much less road chatter. Who neds a sub-meter wheelbase ANYWAY if your speed is never supposed to dip under 20mph? If a loooong 29"er can take the same turn as fast of faster, the wheelbase thing is just overrated, by lack of a bike that is truly long. Main restraintof a road bike, in terms of wheelsize, is the drop bars which ask for a really short top tube, dragging the frontwheel into the toe room. A commuter with 30-40mm tires and 17deg or more swept bar, though...

GT ~ just a quick note: the 635 rims are almost impossible to get here in the UK. A half-decent alloy box-section 635 rim can be found in Holland with a bit of effort. Otherwise, in that size you can only get a single-wall steel hoop. I got mine from a shop in Germany and the tyres come from Poland.