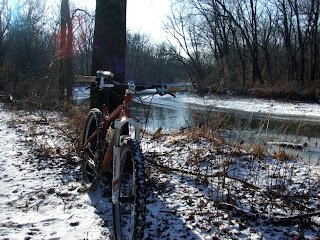 I meant to opine on my steed of choice from my ride Wednesday. The Salsa Cycles Big Mama. There have been a couple changes to the bike set up that have made the Big Mama a different rig lately. Well, different for me, probably not so much for a whole lot of other folks.

The first big change was to get "less big" with the front fork. Funny as it may seem, I never ran the Big Mama with anything less than 120mm fork until recently. The bike was designed around a 100mm fork.

So, recently this Manitou Tower Pro 100mm fork came into my life equipped with the 20mm through axle. I swapped over to that fork and it has made a big difference in handling. The bike feels "lighter on its feet", if that makes any sense. Still has the plush, "plow over" stuff feeling, but not as dramatic as it used to. Now it feels more tuned to Mid-West single track, albeit, rougher, steeper stuff. We've got some actual rock gardens that the parks commission laid down out in the Green Belt recently. The Big Mama still bounded through, but I could tell things were a bit more lively.

In corners the Big Mama felt like the front end was pinned to the trail in a better way. Of course, a shorter fork should do that. The big plus is that the front now feels more balanced with the rear. Huh! Guess those Salsa designers had it right all along, eh? 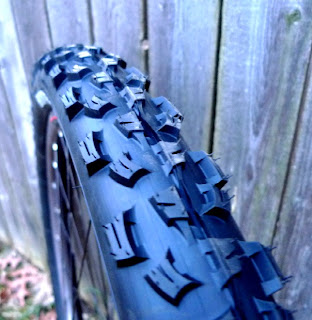 The other thing that worked real well that was new is the Bontrager FR-4 tires. These tires are real knobby!

The tires weren't working the best in the grease the other day, but what does? They were holding their own. In the dry, frozen terrain we have now, they grip really well. What I am thinking is that these will rip in rocky terrain and in loose over hard pack.

The tires look like perfect "El Paso" trip tires to me, and they are TLR tubeless ready varmints to boot. I wish I was going there tomorrow to ride these. (And the Big Mama!)

The next few months of coldness will probably see this bike resting more than not, but I am excited to get a few lighter parts on it here and there to tweak out the weight a bit. Then in March I sure hope an El Paso trip happens, because I think this rig is going to be spot on. Less "big", but more "better" for trail riding there, and a whole lot of other places.

And the Big Mama? I hear it is coming back at some point, but as a "bigger" Big Mama. Huh! Guess I was on to something all along to. Ha!
Posted by Guitar Ted at 1:00 AM

Glad to hear you're diggin' the shorter fork. I'm actually running my Manitou on my Big Mama as well, and it's a 100mm, albeit an older Minute with a new-style Absolute+ compression damper. It's a very nice fork, and you're right, the bike is super balanced with that setup. It rocks... I've been riding it a ton lately since my body's been recovering from my 'cross season-induced injuries.

I meant to comment the other day when I saw her leaning against that tree with that nice river in the back ground. What a sweet rig!

The biggest thing I noticed after I built mine up was that once the suspension was right (and you know when it is), the bike wants to shred!

@Steve Fuller: Yes that is a Manitou thing. Reverse Arch Technology, they call it. Shorter, less mass, and just as stiff or stiffer than an arch in the front of the sliders. Magura actually does a fork with an arch on each side of the sliders- front and back.