More On The Beginnings Of The Modern 29"er: Part III

It's winter, the "off-season", and I don't have much better to do than to delve back into this whole deal again. I wanted to lay some groundwork as to the "pre-history" of the "modern 29"er" as I call it. (Part II can be read here.)


The Search For Alternative Wheel Sizes: In the last post I left you all off at the point where "modern day" mountain biking started to kick off. The activity of mountain biking, as far as it becoming a competitive sport, found its roots in Marin County. A great site for delving into all the beginnings of that can be found here. That site belongs to mountain bike pioneer, influencer, guitar player, former roadie, (in both senses of that term), piano mover, and historian, Charlie Kelly. I highly recommend poking around there. We are most influenced out of what evolved there in Northern California, but that wasn't the only place people were tinkering around with off road cycling. 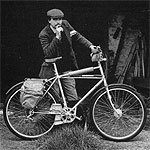 The English Connection: When discussing early 29"er influences, one would be remiss not to include one English fellow by the name of Geoff Apps. Regarded as an early pioneer of off road bicycles in the U.K., Geoff Apps was a consummate tinkerer, always trying to find parts to realize his ideal off road machine. In his pursuits, (of which you can read more about here), he came across several alternative tire/rim combinations that he employed into his designs. Besides the old 28" rim/wheel size, he used a lot of 650B stuff, and even 700c, when he could find it. In fact, it seems that Geoff was impressed enough by the bigger wheels that he shared some info with the Marin Gang about it.

Keep in mind that early on, a lot of experimentation was going on with mountain bikes. This included, and was not limited to, wheel size. What was optimal for off roading? The Marin/NorCal group knew that they had grabbed what was at hand and convenient, but were also wise enough to know that 26"/559ISO may not be the ideal size for off road bicycles. They were searching the outskirts of cycling for what could be employed in their search for the ideal mountain bike, just like Geoof Apps was. The two camps of thought crossed paths in the early 80's. Here is an excerpt from a Bike Biz article authored by Carlton Reid which quotes Geoff Apps:

“I sent some of these tyres over to Charlie Kelly and Gary Fisher, who had built a frame in readiness. They loved them and really appreciated the ride they gave, compared to 26-inch tyres, and also loved the success they had at the races. As far as they were concerned, these 29-inch tyres were the way to go.
"This was the only tyre of this type and size in the world, there was no other choice. Unfortunately getting a supply of tyres was impossible.
“26-inch wheels were not absolutely fixed at that time, so, had the supply situation been better, it is quite possible that 700C tyres and wheels would have been the mountain bike standard now."
"When I tried to promote the 700C idea to UK mountain bikers they just thought it was bonkers Apps, raving again, like he did about short wheel-base, steep angles, sloping top tube, twist-grip gear shifters…"

I also can corroborate this as I have heard Gary Fisher say something in reference to that "700c mountain bike tire" and how it was an idea that stuck with him afterward. This would help motivate Gary to get behind the development of the 622ISO Nanoraptor by WTB in the late 90's.  Obviously, that was an important influence on the modern 29"er.

More On Why 26"ers Became The "Go To" Size For Early Mountain Biking: I received some other interesting bits from 29"er pioneer, Wes Williams, in regards to why the old 28"ers of the late 19th/early 20th Century did not have the influence on early mountain biking, and why the 26 inch bikes did. Here is his note to me detailing this out:

"One of the main reasons that the 28" "Adult" sized bikes of the 1890-1915 era were not copied in the 70's was that most of these bikes had been scrapped , due to 2 world war scrap drives and the need for steel. The bikes that were not scrapped as often were the 26" "juvenile" bikes , the balloon tired kids bikes that were used as a basis for the first " Mtn" bikes . During those wars , those "adult" bikes had of course been replaced with the automobile , while little Johnny's bike was still being ridden by the children , the ubiquitous "Paper boy" .

The 700c designation was officially decreed in 1975 , as a collaboration between Mavic and Michelin , so as to end the confusion in tire sizing . A study of The Sutherlands Manual shows all of the sizes available and will answer a lot of questions . I own a pair of wooden rims from the 1890's and they measure 25 " , the same size as a modern 700c , so we know that the basis of that rim diameter goes way back . If you look at old photos of the era , it is evident that they used a 2" tire , so the "29" "is nothing new , just new to our way of thinking . I have always tried to stress this to people , that I was just trying to bring back what the best minds of the engineering world had developed back in the 1890's .

One must remember that there were no automobiles , motorcycles , or airplanes yet , and in fact these developments were all derived from the lowly bicycle . Look at Henry Ford's first car and see what the wheel size is . Remember what the Wright brothers did for a living before they got a wild hair and built an airplane . The first motorcycles were developed for bicycles to draft behind to set records . Of course all of these thing(s) soon took on a life of their own , but the 29" wheel played a part in the development of these "modern" inventions ."

It is an interesting fact that at the time Wes refers to- the late 19th/early 20th century- the U.S. Patent Office had an entire building dedicated to the advancements made by the bicycle industry of the day. This building was reportedly the same size as the building that housed the patents at that time for every other invention. Pretty remarkable.

So, it is true that the best engineering minds of the days of early cycling were zeroing in on the 28 inch/29 inch wheel size for "adult" bicycles. However; it would take nearly another century for the ideas of that time to catch on with mainstream mountain bikers.

Notes: Also, in the "could-a-would-a-should-a" file pertaining to mountain biking, you will find references early on to 650B sized tires and wheels. Remember that this is a 26"er variant originally made for French camping bikes and randonnuers. (Outer diameter of wheel and tire nominally 26 inches). A Finland based tire company had an aggressively treaded, narrow-ish version of a 650B tire that was briefly used on some early mountain bikes, most notably by Apps, Tom Ritchey, and another little known builder by the name of Jim Merz. (Also: Some early 80's Raleigh and Schwinn mtb based bikes were mass produced with 650B tires and rims) Some alloy rims were available in that size at the time, so it became an interesting thing to pursue. The trouble was that these tires were difficult to obtain, and when alloy 26/559 rims came about to satisfy the BMX cruiser class that emerged in the late 70's/early 80's, the 650B alternative was scrapped in favor of the now commonplace 26 inch mountain bike tire.

It also should be noted that the 700c tire used by Apps and apparently tried by Fisher may not have been a "29 inch" tire. Of course, there is no way to measure that now, and perhaps it doesn't matter. The real importance of that tire and its application at the time is its influence for the later WTB Nanoraptor in 700c size.

Next: The Main Players Set The Stage For "The Tire".
Posted by Guitar Ted at 1:00 AM