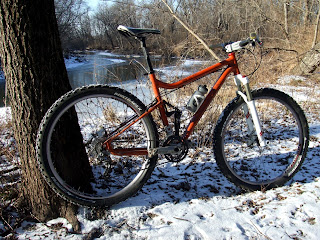 Wednesday found me pounding out the "Best Of" list for Twenty Nine Inches which I do every year. That was going well, (between Twitter distractions and following comments on yesterday's post), but just after noon I saw that it was actually a really nice looking day out there. A trail ride, perchance? Yes.

So I wallowed through some of my cold weather gear and wasted a lot of time trying to match up stuff. Seems that when the temperatures get really cold, I find myself wearing less and less actual cycling gear. I guess I just wear comfortable, warm stuff. At least for myself.

So, you know, a bit of wool, (Twin Six) in the form of a jersey, two pair of wool socks, my Trek "Oslo" jacket, a Headsweats fuzzy beanie dealio, and Dickies slacks with my Bontrager shoes under some old Trek shoe covers. Gloves are some Giro things and my trusty Bell helmet goes up top of it all like a Christmas angel on the tree. Hey, It works for me! 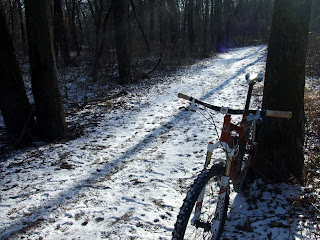 The day was warm enough, I suppose. What? 20 something, maybe. Anyway, the trails have just a bare wisp of snow on them. A nice lacy coverlet to brighten up the otherwise dead looking woodland trail in the Green Belt.

Funny how you get a constant "strobe" effect while wheeling through there. The sun being at such a low angle these days that it almost always looks like a late morning or late afternoon. The light filters through the mostly wand-like trees and their boles shutter the light in an almost silent picturesque sort of way that distracts and blinds you to what you could normally spot a hundred yards away. For instance, I was startled by a man on a hybrid rig and his furry dog coming towards me. I didn't see them until the big dog was nearly right in front of me. No worries. It was good to see another trail user, (or two), enjoying such a great day. 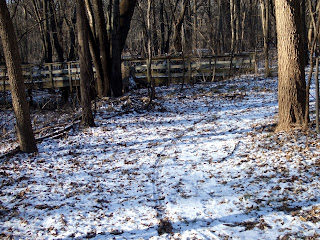 I got to thinking on the way back in after about an hour or so: Will this be the last time this year? We are supposed to finally get a big dump of snow this weekend, which if it happens, will shut down the trail riding till spring. Well, on regular mountain bikes, that is. If the Mukluk comes together, (and there is no reason to think that it won't at this point), I will be plying these trails again soon, snow or no. However; it might not be this year yet.

Funny thing: Last year on the 8th of December we got a big dump of snow and it never relented until April. Will that happen again this year like that? Well, if it does, the snow bike will be getting pressed into duty a lot. Last year I made do with some plunking around on 29"ers, but not anymore.

So whether this is the last hurrah or not doesn't seem like such a big deal this year. I've got a plan!
Posted by Guitar Ted at 1:00 AM