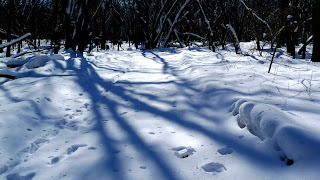 Get a good look at this image. Wonderfully white winter wackiness. Okay, so that's what it looks like now. My weekend was dominated by dealing with this stuff.

It all started on Thursday night when it started to snow again. (I'd also ridden on Tuesday last week in the snow). Friday I woke up and saw about 5-6 inches already on the ground with flakes still falling. Time to arm myself with a shovel and hit the street.

Yes- I said, "hit the street." I have to clear out the snow from around our cars out front. We do not have a snow emergency plan here. My alleyway never gets plowed out, so fah-gedda-boud parking in the garage. It's the street for us, and we need to shovel out about 10 yards from the curb.

Of course, our neighbors do not do a thing. Now- this is an optional thing I do, but in order to preserve a spot for our vehicles, I shovel the street in front of each neighbors house on either side of me. Yeah......lots of shoveling.

That ended up becoming 4 hours of shoveling which was very physically demanding work. But hey! I can park my car now, and I burned up a lot of calories.

Now, it would be nice to have my "Other Bike Project" here to ride now, (Salsa Mukluk), but it isn't here, and now I'm hearing that by the end of the week, it is supposed to get real messy and weird out there. Yeah.......and if it does, I bet the Mukluk shows up. Oh well! I knew it would go this way. Primo snow conditions and the Mukluk just were not meant to happen at the same time for me.

But that doesn't mean that I have not been messing around with what I do have. I mounted up a Larry tire on a Rolling Darryl with some red ribbon just for the fun of it. 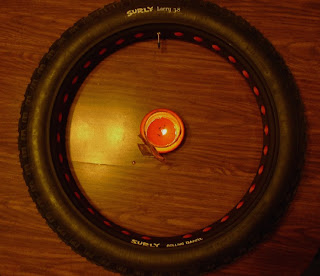 Nice table center piece, eh? I was going to get more creative with the rim strip, but the red matches our Cinnamon scented candle better and well, truth be known, I got the ribbon for free! Works great too.

Mukluk's are blue, so the red accent deal should work okay and I have plenty of ribbon, so it looks as though this will work for now. I may even look at adding a few more red bits here and there.

And that fat Phil Wood hub? I have spun the free hub so many times I think it is well worn in by now!

Ah well. If and when I see the Mukluk I will be riding it come snow, wind, or rain, so what if this week end's weather wipes out our great snow cover? Right? I just hope it all doesn't turn into one gigantic sheet of ice and stays that way till March, that's all.
Posted by Guitar Ted at 1:00 AM

The Mukluks are the bomb! We saw several on the trails around Anchorage last week while visiting our daughter for Christmas. We rented a Pugsley and a 9-Zero-7 from Arctic Cycles and hit the great single track around town. The only down side was the minus 12 degree temps! Billy at Arctic Cycles said the bike shops have sold over 300 fat bikes in Anchorage so far this year and are just about sold out. One shop we visited had 2 Mukluks left and were afraid they wouldn't be able to get any more this year.

I feel ya,GT. We gots around 4-5 inches last few days,lots of it melted off (despite 20's temps),but got an additional 6-8 inches last night...when I drove her to the carpooler's for work this AM,the Neon scraped bottom all the way,LOL!

There's better weather coming though,calling for 50's by week's end/all weekend,and I'll be starting '11 off right...going to Pisgah (NC) for the first time with a buncha friends to ride the weekend :D Already looking better than '10!

Have a warm week,my friend.