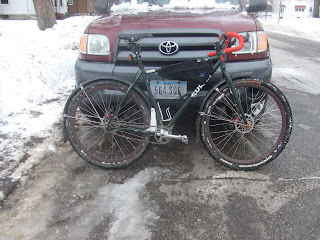 For the past several years I have been using the Karate Monkey primarily as my winter rig. This is the same one featured in the recent history of 29"ers series. A 2003 Camp Stove Green one. Of all the Karate Monkey colors ever issued, this is still my all time favorite. The newest Battleship Gray is a close second.

My Karate Monkey has been an exercise in constant change ever since I've had it. The latest tweaks are the Cane Creek Thudbuster ST post and a Jaand Frame Pack. The little strip of white is an experiment down there by the crank.

That's a deal inspired by Geoff Apps. It is a work in progress. A chain guard that will eventually become part of the Planet Bike Cascadia fender. It is designed to keep my rear wheel from dumping "crapola" all over my chain, which then distributes said "crapola" all over my chain wheel and free wheel cog. So far, I have used a huge Tyvek based prototype and now this minimalistic prototype made from some plasticky header card material from a Geax tire. My final effort will be in black, to blend in with the fender, and will be riveted right to it.

I almost forgot to add that I have a really great Sun Lite free wheel on this thing. Basically, a Dicta free wheel, but it does seem to be made with a higher level of quality than I am used to seeing from Dicta. I know-I know.....White Industries, yada, yada, yada. Look. I will be subjecting this to wet, grit, snow, mag-chloride, and you know- "crapola"!  White Industries free wheels are too expensive to use in that environment. Besides- I get to overhaul a free wheel once in awhile, which is strangely satisfying. (Well, at least for me!)

I rode this Wednesday across town to the bicycle shop and back to pick up the Jaand Frame Pack. Oddly enough, the set up is so balanced on this bike that it handles snow amazingly well. It gets a wee upset in deeper stuff, but what bike wouldn't. Recently, a bunch of banter on heavier wheels has me thinking that perhaps it is the wheels on this thing that are helping me out. 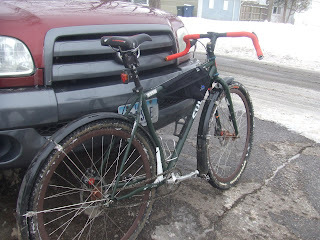 The wheels on the KM are my "Chocolate Chips" wheel set. Custom color Velocity Deep V rims laced to Surly "Jim Brown" anodized New Hubs with some "Aerolite-ish" type spokes that I found at the shop. Nutted axles, but that really doesn't matter. What does matter is that the Deep V is a heavy rim. That and the Specialized Fast Trak Pro tires are heavy. These are the first issue Fast Traks, before Specialized even had a 29"er. They don't make them like this anymore and for good reason. Too heavy for a 2.1 and the rolling resistance is very high, since the traction is high. That's all good in snow though, so I leave them on winter after winter. Anyway, the flywheel effect of these wheels is noticeable and that carries you right through car-snow, ice, and, well, most any "crapola" that I encounter going to work and back, or wherever I ride in winter. They just do not get knocked off-line all that easily due to that. It's all good!

This bike holds another distinction for me: It is the bike I did my longest ride ever on. It was the first organized "Guitar Ted Death Ride Invitational" back in 2006, I believe. That ride was 152 miles, but I did ride over to and back from the start, which wasn't recorded on my report. So, I figure I can add about an extra 10 miles to that and that makes the Karate Monkey my all time longest ride holder by far at 162-ish miles in one shot.

Which leads me to think that I ought to ready this dog for some long distance gravel duty this summer. Maybe there is something about the set up, maybe not. Oh well- I would just like to try it again, as the ol' KM has been stuck doing winter duty for far too long now. This spring, the fenders are coming off, and I'll put the KM in some different kind of "crapola"! Gravel that is!
Posted by Guitar Ted at 1:00 AM

i was there for that ride. it was darn near my birthday and it was a good one. i think we got sprayed by a crop duster if i remember and we both had a weird throat crud a few days later.

my newer red KM gets daily duty with a change from wide slicks in the summer to old wornout knobbies in the winter. fixie at the moment for the 4wd affect in the slick.

My KM just got turned into a Single Speed winter duty bike last night too. :) I put some cheap heavy knobbies on it this year rather than the standard Nanoraptors I have been running just to see how they work.

I noticed that tyvek piece on shots of your KM last year. I know that will work well for a SS bike, but I think implementing that for anything with a triple up front might be a bit of an exercise in patience. Never the less, it's a good idea.

@mw: Yep! You got it right. Props to you as well, you drove all night to get there for that ride. That was the ride we got to know each other well. You're a mad man! Thanks for making the time to show up and ride.

@Steve Fuller: Hmm.....didn't know you had a KM. Nice! They are a great bicycle.

Like mine. Put the Javier tires on, like Steve, for off-season duty. Really liked the way it worked/fit in Wisconsin last summer. 500-and-some miles in 4 days over varied surfaces with no discomfort. Why would I want anything different.

What fenders are those? The reason I ask is I am very close to buying a SE Stout for winter commuting duty here in Wisconsin, and I know I will want some fenders to keep the crud down.

@Glenn: Those would be the Planet Bike Freddy Fenders Cascadia 29 models.

GT - Yeah. Had it for a few years. Campstove green. That was my bike for TI V5 and DK 2008. Probably going to be a full time SS/experiment/test bike now.

Perhaps a fully enclosed chain guard could be handy for keeping the crud off the chain: http://www.hebie.de/Chainglider-350-38-42-44.hebie350chainglider.0.html?&L=1

I haven't used on yet, but am thinking about it...