More On The Beginnings Of The Modern 29"er: Part IV

It's winter, the "off-season", and I don't have much better to do than to delve back into this whole deal again. I wanted to lay some groundwork as to the "pre-history" of the "modern 29"er" as I call it.(Part III can be read here.)

The Main Players Set The Stage For "The Tire": In all that came before the WTB Nanoraptor, the thing all the riders of 700c based mountain bikes were noting was that a truly voluminous, aggressively treaded mountain bike tire did not exist and was the one thing that most of these folks felt was the thing holding back 700c from becoming a truly viable size for off road bicycles.

Not that there weren't efforts being made despite that fact. Not that things like geometry and proper frames hadn't been made, because they had been done. Still, none of this was quite working as well as 26 inch based mountain biking, but the performance of the 700c stuff was so tantalizingly close and showed so much promise that the people behind the 700c movement were not giving up. If anything, they were even more determined to see it through.

In my last post I mentioned that Gary Fisher (and Charlie Kelly too, by the way), had some big wheeled  influence from Englishman Geoff Apps. Well, they may also have picked up a cue from local frame builder and general mountain bike genius, Charlie Cunningham. Charlie was often seen riding a bike with a 28"er/700c based front wheel because he liked it better than a 26"er front. Here I will quote from Mark Slate of WTB:

"Charlie has been riding a 700x35c tire bike since I think about
1978. I think the first thing Charlie heard of a fat tire for 700c rims
was when Wes came out here and brought his "Mountie" with 700x47c Goliath tires."

So it would seem that Charlie Cunningham also may have had some influence on the thoughts that a 700c mountain bike wheel may be viable thing. 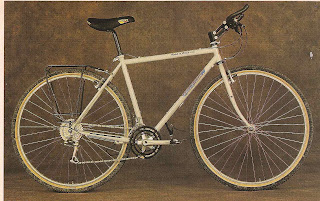 Another of the early "big wheel" proponents was Bruce Gordon, a frame maker in the city of Petaluma, California. Bruce was pushing the idea of a "multi-terrain" 700c bike he called the "Rock n Road" bike. WTB's Mark Slate remembers Bruce in this e-mail transcription found in a thread on mtbr.com:

"Bruce is a highly opinionated and talkative guy (if he has the right audience). He is an ace frame builder himself, so experimenting with bike geometry is something he has done plenty.....No doubt in my mind that Bruce favored the bigger wheels."

Ross Shafer, the founder of Salsa Cycles, had a shop in Petaluma as well, and his remembrances of Bruce and 700c for off road cycling are also found in a thread on mtbr.com:


"Bruce Gordon (his shop was next to Salsa's at that time in history) is indeed the first person I know of who seriously pursued trying to get fatter tires for 700c rims. I know that Wes (Williams, of Willits fame),  and he were pals, but I have no idea how much Wes had to do inspirationally or logistically with those first bigger tires Bruce got ahold of (had made?). I know that before Bruce got his tires going the biggest they could find was indeed the Hakkapelitas (sp?) from Finland. This was back in the days when the bike industry was trying hard to create a new "niche" and tried really hard to push "hybrid" bikes. A hybrid bike being a 700c bike with upright bars and tires that were fatter than your usual 700c fare. Bruce sold quite a few of the "Rock n' Road" bikes that he designed around the bigger tires he got. But the whole hybrid thing became more of a joke in the industry than anything else. Wes' is the man when it comes to really pushing the 29'er mtb thing. Wes was a friend of mine as well and if I recall correctly he first caught the bug by offroading on his fixed gear 700c scorcher bike"

From the above we can safely say that Bruce Gordon was a touchstone for setting off the big wheeled 700c idea in several folks minds, but most importantly, Wes Williams.  Wes, who was the principal frame builder, designer, and production manager at Ibis Cycles for 9 years, was tinkering around with ideas he gleaned from late 19th/early 20th century designers. He built his first "28"er" in 1988 and never looked back to 26"ers again.

Wes was thoroughly convinced that the early bicycling experimentalists that landed on the 28"er as being the ideal size for rough roading were still as right as ever, and he was willing to tell anyone that would sit still long enough to listen. Wes made a trip to see WTB and brought a 28"er with him. Again we hear from Mark Slate:

"Wes and I rode together and he left the bike with WTB so others could
ride and experience the big wheel feel. He pushed hard as you know Wes will
do when he has an idea of the better way and he certainly was not shy about
letting others know that the little wheels were inferior. I'm not sure
of the dates when Wes was here but he might remember."

The stage was being set. Gary Fisher was poking around at this time as well, having a race team sponsored by WTB in the 90's. The big wheeled idea was now seeping into the minds at WTB as shown by this inter-company Word Document Mark Slate shared from WTB in the same mtbr.com thread referenced before:

"Some old Word docs
survived somehow. In search of the "smoking gun" I found this (to the mold
maker):

September 28, 1998 - Gary Fisher has been after WTB to produce a 622
bead "2.1" tire. Several top riders I know in Colorado have bikes to fit
these 28" (+) tires. The Continental Goliath 47mm is now being used. These
guys are also interested in a full size tire to fit 700c rims. There is
validity to this size and we may be seeing future production of bigger wheel
mountainbikes. Mold production for this diameter tire may be a problem. Please
inform me regarding production of the 2.1 Nano Raptor with a 622mm bead."


With the tenuous promises of "future production mountain bikes" and Wes Williams passionate evangelism, WTB set off to do what hadn't been done before: Make a true 2 inch wide mountain bike tire based on a racing tread pattern in 26 inch size. What became known as "The Tire" to the early proponents of 29"ers- The WTB Nanoraptor.


Next: Why The Nano And What Happened Afterward.....
Posted by Guitar Ted at 1:00 AM

Well, they may also have picked up a cue from local frame builder and general mountain bike genius, Charlie Cunningham. Charlie was often seen riding a bike with a 28"er/700c based front wheel because he liked it better than a 26"er front.

At the time Charlie scoffed at 26" tires and would have nothing to do with them because in his opinion the big wheels made the bikes too heavy. Key to his opinion was the fact that he rode trails but never participated in the Repack downhill, which would have destroyed the bike he used.

Charlie was not an influence on us, more the other way around. He finally accepted the new standard three or four years after everyone else had.

@Repack Rider: Thanks for chiming in with that. While I didn't say that Charlie believed in heavy wheels, I can see where maybe that was implied by my statement you quoted.

My intention was to show that some influential folks were not riding the default 26"ers and maybe this made some folks re-think that idea that 26 inch was the way to go.

Sometimes it isn't so much what your words say, but what your actions say that can influence others and Charlie, being an influential person on early mtb thought, was doing something that may have struck a chord with others thinking about 700c for off road.

I am the original owner of a Rock ‘n Road built in Japan that, according to Cupertino Bike Shop (where I purchased the bike), was the first sold in the US. Mr. Shafer’s comments about Bruce appear spot on. I went in search of the Rock ‘n Road after reading an article about this new “hybrid” bike wearing 700x44 Hakkapelitas. Instead of the Hakkapelitas, my R’nR came with BG labeled folding 700x40 or 42 knobbies, which were mated to 36H Araya CT-19 rims. The bike rode quite well and the speed gain over my mountain bike was noticeable. However, the tire was a mismatch for the rim as the bead proved difficult to properly seat. To my horror, the front tire blew off the rim at over 30 mph while descending Overlook Road in Los Gatos (above the Cat’s Hill Criterium course). I saved the bike, but the rim did not fare so well. Wheelsmith expertly laced the Deore XT hubs into a set of Mavic SUP T-217s that I still ride to this day. I initially installed a set of Cheng Shin 700x38s with a Moto GP tread pattern that performed superbly on the street and hardpack, but now ride a set of All Condition Armadillos. Something tells me I need to get back to some fat knobbies as the early big tire pioneers intended.