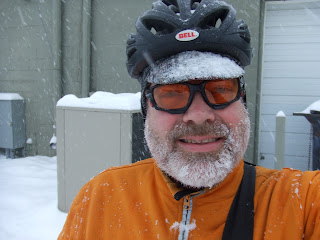 Know Your Enemy: In the cycling world, we all get why we do what we do. You know, riding a bicycle, staying healthy, being more responsible with our resources, and well, let's admit it- having fun.

Trouble is, we're like the Amish. We know why we do what we do, like the Amish know why they do not have electricity, but the rest of the world thinks we're odd, at best, and at worst, they think we're stupid.

I mean, look at me here (<==) This was taken last week when it was snowing on my commute to work by bicycle. If you are a cyclist, you understand, but we're a vast minority, and most people just do not get it. Like the other day, a family friend that knows me well told another friend of hers that I was out riding, in December, in the cold, while it was snowing. The guy thought he was being lied to. He told my friend, "No one rides a bicycle in this kind of weather!"

See what I mean?

Or how about this story published on "Cyclelicious" where a cyclist is harassed by two policemen, one of which is quoted as saying, ".....you shouldn’t be riding a bike in San Francisco. I don’t ride a bike here, it’s too dangerous!!” The story goes on to relate how the cyclist educated the police chief as to how and why she rode in the metro area, to help preserve her life. The police got educated. One small victory.

More Education: So, we just need to educate people better, right. Right. Absolutely correct. We need to start by realizing, like it or not, that most everyone that isn't a cyclist probably thinks we are freakish, weird, odd, possibly stupid, maybe insane, and that because of this, we don't know what is good for us. Maybe they think that we are so "out there", we can't be reached, so they may as well just treat cyclists like the idiots they are. We as cyclists need to be educated as to what the reality of our existence means out there on the roads.

Harsh? Unrealistic? Well, think about this: If a man walks into a pit full of alligators, willingly, and gets eaten alive, most of us are going to figure that this doofus had it coming, no? I mean, why would you think you could even do such a dumb thing and live, right? I believe this is exactly what most of non-cycling America thinks about cyclists on the roads and byways.

I don't mean to say that we as cyclists don't belong on the roads. I don't mean to say that what happens to cyclists at the hands of folks in automobiles is somehow excusable, or even remotely "right". I'm just saying this is probably the psychology of most non-cyclists out there. They don't understand the "why" of what we do. They have no basis for making a case for what we do as being sane, so they react to us in like manner, as if we were insane, and it goes down hill from there. To them, we are putting ourselves at unnecessary risk.

So, yes: the non-cyclist needs to be educated, but so do we. We need to understand that in many ways, we cyclists are "the enemy" in the minds of a lot of folks today. We need to accept that what we do isn't seen as something a normal person would do in society in the U.S. today, and hopefully we can change that perception for tomorrow. That will take some time.

Until then, we as cyclists should act accordingly.

Tomorrow: The Car Culture And Cycling
Posted by Guitar Ted at 1:00 AM

Very insightful, some of your best stuff.

My family doesn't even "get me" riding in the winter. I cannot expect anyone else to if the woman I love laughs at me as I head off into the winter wonderland.

Happy New Year to you and yours!

Thank you for the eloquent percolation of where cyclist and society is and the directives that we all can take to educate each other and change perspectives.

Thanks I needed that. No, really I mean it. I find that at times I just give up trying to help people understand the "why?" part of what I'm doing. Sometimes it seems that we're so many galaxies away from each other that it's just not worth it. I have found myself responding to people who say "why do you ride your bike 25 miles to work one way in the winter?" - "Uh, I don't know, I just do". I do know all the reasons that I do it, I just figure they probably won't get it, so I don't bother any more. Thanks for showing me that I still have to try - they may really want to know "Why?".

I'll have more to say soon, but for now, I'll simply say thank you for your eloquent thoughts on this, as we're much on the same page, but we need to keep pushing to achieve greater understanding and acceptance. And we'll get it. As resources become more scarce and conservation becomes more valued, our contribution to a sustinable society will be better understood and appreciated by the masses.

I am enjoying the blossoming positivity.

AWESOME an dinciteful posts,GT,making no small train of thoughts in between my ears :)

You're dead right with this. I hope that the numbers of people riding the roads every day (in winter, too) continues to climb, since increased numbers give us a little more credibility and less of an "insane" designation... my fear and suspicion, however, is that utility cycling's current popularity will die off again soon enough.

The more the merrier, but I am quite prepared to remain a freak and keep riding year-round either way. It's just to good on my brain to stop.

The best thing that can happen for the cycling "lifestyle" is for the price of gas to continue its trend up and above the $3 barrier. People will start giving two wheels a serious look when it costs them an arm and a leg just to pay for a week's worth of petrol!