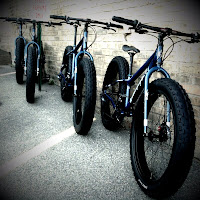 Milltown Cycles Mukluk Release/Winter Arrival Party: I'll be skipping town this weekend to attend the Mukluk/Winter party-dealio thing at Milltown Cycles in Faribault, Minnesota Saturday evening. Proprietor Ben Witt and his mechanic Curtis have been busy sprucing up the joint of late and this is kind of an excuse to show off their accomplishments and get some bike geeks that Ben wants to see to show up. And there will be some serious bike-geekery going on, lemme tell ya! I happen to have an inside track on some of the esteemed attendees and I know that the vortex of bike gab will certainly be swirling around the confines of Ben's shop well into the evening. Look for a report on that coming up on Monday, most likely.

Time For A Concept Bike: Part of the bike geek-speak that will be happening will have to do with this project while I am up there. Ben tells me that he has been cooking up some ideas and we'll have the ears of various bike designer types to bend while we are there munching on whatever Ben has cooked up on the grill outside. This project is not just an exercise in brain warpage either. I am serious about actually putting the plan into motion for an as yet undisclosed gravel adventure I am putting on my calendar as a goal for next year. More on that goal later, but do look for a report of sorts on this project soon.

And Speaking Of Concepts.... The biggest in mountain biking this century is arguably the 29 inch wheel. It has revolutionized the way people not only think about their off road ride, but how they ride off road. I know it changed the way I looked at mountain biking forever. It's more fun, and that's the bottom line. Well, some know the story and some don't, but I found an image this week I wanted to share with everyone. It's been too long for this blog to have been going without this image having been shown here. 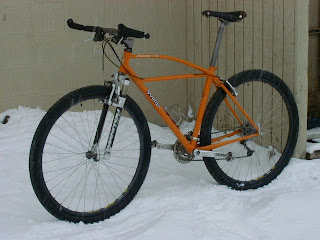 A bunch of people including Wes Williams, Gary Fisher, and others, had persuaded WTB's Mark Slate to make a ISO622 X 50 tire based upon WTB's then current racing tread, the Nanoraptor. A small batch were made early in 1999 and handed out to the principals involved in the then tiny movement to bring bigger wheels to mountain biking.

Wes Williams, who had formerly been a welder at Ibis Cycles, had been quietly making his "28"ers" in Crested Butte, Colorado using the largest ISO622/700c tires he could get his hands on at the time. These bikes were made under the Willits Brand name. (Mostly Continental Goliaths) These tires were not really mountain bike tires, being somewhat skinny, (45mm or so in width), and not having an ideal tread pattern for mountain biking. Wes noted that the outer diameter was nominally 28 inches, thus the "28"er" designation.

Wes got some of the first Nanoraptors and was quickly turning 28"ers into what he dubbed as "29"ers", seeing as how the overall outside diameter had increased with the Nanoraptor. In March, 1999, Wes unleashed the first of these bikes. Moots made one later in the year, and Gary Fisher and Steve Potts collaborated with Mark Slate to build others by late 1999/early 2000. The 29"er movement was underway.

Now some will point back to other bikes based on 700c wheels and say, "What about ____". Well, the thing is, none of those bikes had a two inch wide/50mm tire and since that was the case, none of them had a nominal 29" outer diameter. Yes- there were 700c  based mtb bikes and even going further back, 28"ers being made in the late 1800's, but nothing had ever been concocted to match that first orange rig in Crested Butte in March of '99. That's where we got our "modern 29"er". That's where this all started as far as a bicycle that could become what it has today. It all hinged upon getting that big, voluminous tire that just didn't exist before 1999.

It is as if several threads of thought got focused on that one moment when "The Tire" was conceptualized and first produced, then all those threads of thought were wrought into something new that spread back out and grew and became the 29"er movement, and now is well on its way to becoming "just a mountain bike".

Well, that's a shortened version of a very big, very complex story, but there ya go! Hope you enjoyed that and I hope ya'all can get outside and enjoy the world this weekend! Ride On!
Posted by Guitar Ted at 1:00 AM

I had plans to drive over to Ben's from Chicago, figured this would be as good a chance as any to grab some time, meet up and hang out. But 6 hrs on the road in a snowstorm killed that. We are to get somewhere between 2-9 inches of snow by Saturday afternoon depending on who you listen to. That makes the trip real tough.
I had high hopes of orbiting around that bike talk, listening and learning. It was the event to make my week. Now, I'll just be manning the plow and snowblower. Enjoy. I await the write up.

there's some fat tire touring bikes back before then, but yeah...

nice pic of a historic bike and nice writes.

pc has one of those forks. he always intended to use it on some sort of hybrid or cross bike. funny how that idea now days would be the 29ers of now.

Wish I could make the trip up north too but it's not happening for me. I will be bike geeking anyways but my wife won't appreciate anything I have to say.

@Wally Kilburg: Aww crap! Hate to hear that. But to be honest, it's going to be dicey for us getting there as well. Hopefully the storm gets a move on and the emergency crews have done their work by Saturday afternoon.

waaay back machine post! Back then (99), I was working at QBP manning the phone banks, and frequently took in calls from this guy in CB that kept ordering these big touring tires. I asked why and got quite the ear full. Turns out it was Wes of course.

A few years earlier I was working at Western Spirit Touring in Moab and road with the owner a couple times on what I thing was the first Monster Crosser. A Willits 28er set up with drops. Guy dropped me like there was no tomorrow.

I'll be driving up to Ben's through the snow too. Nothing like a bit of a challenge!

Hey Everyone: This was e-mailed to me by Wes Williams and he wanted to share this on the blog:

Subject: hey
I tried to comment on your blog , but unsuccessfully . Good on you ! I credit Bruce Gordon and Gary Helfrich for finding the first real 28" tire , a 700-47 Nokia Hakkapelitta in 1987 , and I made my first 28" in 1988 .( 700-38 does not qualify ) This was the same year the Rockshox was introduced , yet I was already bored with 26" , and have been riding the 28" off-road since then . The " hybrids " introduced in the early 90's ran 45c Smokes at best , and I imported 300 Goliaths in 1995 . This was the largest tire in existence at the time . The Mountie pictured was completed in 1997 and was designed for a tire that did not yet exist .This was the bike that Mark Slate was loaned over the winter of '98/'99 , to decide if I was full of shit or not . ( I wasn't ) . Bob Poor deserves credit also , as he backed me up all the way and came to my defense for years on the internet . I had told Mike Sinyard ( president of Specialized ) in 2000 that it would take 8-10 years for general acceptance , and that is just about right . Moots built Don Crook's bike in May 1999 , and I had completed several bikes for the Nano by then . Gary had to wait for Potts to build his personal bike , as he doesn't actually build frames , and Fisher introduced one model in 2000 .I hope this helps fill you in further as to who is responsible . Bruce should get some credit for his Rock n Road , which was the precurser to that whole fleet of hybrids of the early 90's and to mine , also . Thanks , Mark

Also a correction from Wes: ".. also
I was principal framebuilder / designer/ production mgr. at Ibis , not just the welder . I worked there 9 years"

Great stuff, G-Ted. Pretty amazing how insightful Wes was about how long it would take for general acceptance of the big wheel platform.

P.S. I just noticed the Dos Niner is back up on Salsa's website for 2011, but I don't see any changes from the prior model year. I know you had mentioned that Salsa was taking a look at the Dos and it was off the website line up for a little while.

Thanks for the history GT! Good to hear Wes adding in to the discussion. He's the reason why I ride shorter cranks too!