The "Other Bike" Project: Update 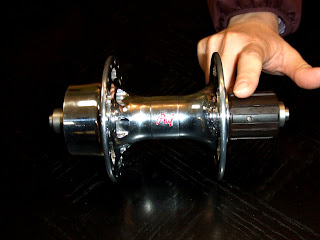 As promised yesterday, I am sharing some bits and pieces of my Mukluk project. This........this is the rear hub!

It is a custom Phil Wood hub which has a 170mm O.L.D. that fits the rear of the Mukluk. This dimension will allow for a nearly symmetrical rear wheel build and obviously is snow bike specific. I suspect this will be the dimension for all snow bikes/fat bikes going forward. So, with the bomber Phil quality, I should be able to use this hub for quite some time.

Like most stuff made by Phil Wood Company, it isn't light. It is durable, and the bearings are of the highest quality. The machine work is amazing, and the polish is first class. The massively tall hub flanges make the spoke lengths quite manageable, even for such a wide hub. In fact, they are normal 26 inch mtb lengths that can be found anywhere. The front hub should be coming soon, and I'll have the matched set ready to be laced up with Sapim spokes to........ 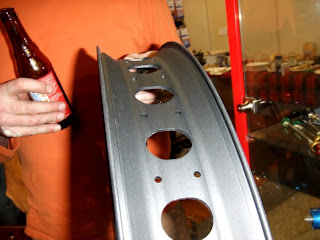 ..........these rims. These are the Rolling Darryl rims by Surly. As you might have noticed, they went away from the dual rows of oval cutouts to a single row of oval-ish holes. Surly "Dude-tator for life", Andy Corson, told me at Interbike last fall that they were waffling a bit on the design and were not confident that the dual row-o-holes would be suitable for anything but snow riding. well, that isn't Surly-enough, and they knew it, (I think, maybe they did........anyway....) So, at any rate, here is the new Rolling Daryl! WooHoo!

You can still lace 'em offset, if ya need to, or symmetrical, like I am going to. Either way they will rock, and weight-weenies may rejoice in the fact that they weigh 850-ish grams and that they won't have to wield a dangerous power tool with a nasty, spinning sharp thing-a-ma-doodle to get them that light. 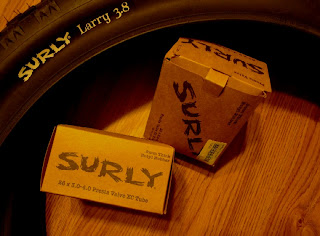 Of course, there needs to be some rubber product here. With that in mind, I have two Larry tires and two big ol' Surly tubes to go inside of them. While Benn Witt has set up a Larry on a Rolling Darryl tubeless, I don't see the necessity of doing so right outta the gate. It saves 600 grams for the wheel set in weight, which is significant, if you were talking about normal wheels and tires. However; in the grand scheme of things here, (and by that, I truly mean el grande'), that isn't much in comparison to the total weight of the wheel set. That and with the complications of running a tubeless set up on wheels and tires not meant to be run tubeless, well, I don't want to be on the side of a trail somewhere trying to stuff a tube in a Larry at 10F. But that's just me.

Finally, I will need to be thinking of a creative rim strip, since you'll be able to see it through the oval "windows" on the Rolling Darryls. Meanwhile, the front hub and spokes are on the way, and the rest of the bike? Well, I was told last Saturday it'll be here in two weeks. Stay tuned!

A buddy of mine is using the red plaid duct tape as a rim strip on his rims. It looks way cool

go to any fabric store and get a heavy cotton or silk ribbon. you can even get fuzzy fabrics for a way cool look. can you say pink cammo. cut to width then secure with a foot of quality tape. No need to use sticky rim tape as after the first dirty ride it doesn't look all that good anymore from everything sticking to it.

That stuff is so cool. And yes, THAT is a hub. WOW! I want one for sand and desert riding...Google The Mojave Road for instance. Or maybe a tour of Death and Panamint Valleys.

That hub is huge (and heavy) having felt it myself. high quality stuff though.

-The Uma rims are hugely popular, but I can flex the rim in my hands easily. That flex isn't much of an issue when combined with the 4" tires. I would argue the same about 170mm hubs and 135 offset (both have extensive Uma use). I would much rather be able to find economical hubs for wheel builds than be stuck to just a couple of choices.

-Also, why do you have a link at the top left of your blog to your conclusions about the Salsa Fargo and not all the other bikes you test?

@Charly Tri: Yeah, but.....I won't be buying another snow bike/fat bike hub ever in my lifetime, most likely. ;>) Plus, all that flex and offset stuff doesn't mean a thing on snow, but off road? I think it will then. Using your logic, a six inch travel full suspension rig doesn't need strong rims either. But it does, as we all know. The Mukluk isn't just about snow.

As for the link, the Fargo is something this blog gets hammered on for hits, and that and drop bar stuff is going to have its own pages. All the bike stuff goes to Twenty Nine Inches, where it belongs.

Snow bikes are so rad. Reading your updates is 1) fueling my desire to own one and 2) making me consider a snow bike event. Thanks for spreading the love!

@Cornbread: Thanks man! I am stoked too. I hope to use the bike alot, not only in winter, but during the rest of the year too. Look out sand! Here I come!

@ Cornbread: I think you know some of the guys that are putting this on?

Not sure if it is just for Pugsleys or all fat bikes...

I have a question about the holes on the rims. I see a previous post about using fabric to cover the holes, but what do you use on the inside? Just layers of duct tape to keep the tube in? I've never seen a rim like that before but it looks so awesome!

I was leaning towards the complete Mukluk, but a custom wheel build might be in order now. Thanks for sharing.

@Errin: Thanks for checking out the blog!

The rim strip only has to keep the tube inside from (a) chafing on anything, like spoke nipples, sharp edges inside the rim, etc, and (b) from protruding out any drilled or machined in holes in the rim, like spoke drilling holes, or as in this case, weight savings "windows".

So, if a ribbon is strong enough, it can be used on the ultra-wide snow bike rims. Usually the ribbons are secured by tape where the ends overlap and then you are good to go.

Many commercially available rim strips are fabric, with the most prominent example being Velox rim tape.

The fun thing about the Rolling Darryl rims and others like it is that you can have fun with colors and patterns for rim strips which will show through the "windows" in the rim as you ride.