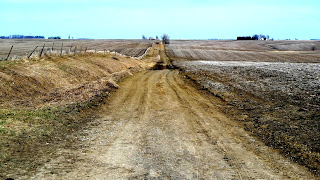 Another Trans Iowa V7 Update! This one is directed at the Rookie Class, but maybe some of you Vets and Finishers might pick up a few clues from this as well. (Update #5 can be read here if you missed it)

When Should I Stop For Supplies? I've already seen this question out there and this year with our move towards a more self supported type of event than ever, this becomes a very important question.

In past Trans Iowas, the question of "when" was determined by whatever your philosophy on carrying stuff was. Some would "travel light, freeze at night", while others would carry the kitchen sink. With my penchant for passing the route by convenience stores at regular intervals in the earlier events, many "learned" that they could carry little more than some emergency nutritional products, and some tubes. This became the norm, rather than the exception. Folks were even leaving the hydration packs at home. Knowing you were going through towns and checkpoints that were usually right next to convenience stores meant that you could get away with less. Well, that's all changed now.

Run With What Ya Brung: Here are some facts about this years event. One: Checkpoint #1 won't be near a convenience store. There will be one in the town, but it will be several blocks away from the route. Of course, Checkpoint #1 is "only" about 50 miles in, so......

But keep in mind that you won't be going through a proper town for another 50 miles, (and it has a service station, but no convenience store), and then......  Well, let's put it this way: You will be a long time into the afternoon before you see a "proper" convenience store. At least on the route. Sounds pretty severe? Well, while we are accused of being so, we aren't heartless. There will be two convenience store opportunities off route before the first 150 miles go by. We'll note this on the cue sheets, but you'll have to abide by the rules and leave and enter the course again at the same point as indicated on the cues. You'll also have to determine whether you can afford to spend the time it will take to travel the round trip, (yes- extra mileage!), because you will be eating into your time reserves by stopping/traveling to and from convenience stores off route. But, if you really need it, it could be a ride saving move on your part. You'll have to decide, out there, while you are in the thick of it.

All this to say that you had better carry reserves for the long haul right outta the gate. Because if you don't, it well could be an early exit for you. This will also play into strategy later on in the event, should you make it that far.....

Bringing It All Back Home: While the beginning of the event won't see many convenience stores on route, the middle of the event will go by a couple. Then you'll get to Checkpoint #2, approximately170 miles into the route. Those that have been keeping notes already know this place will not be near a convenience store. You'll have about 140-ish miles to go, and you will have one convenience store stop somewhere in there on route. You'll also have one just off route. That's it.

Where those convenience stores are we won't be telling you. Be prepared! You'll need to carry plenty of water and food. You'll be riding at night through a lot of this section, and yes- we are fairly certain the two last stores are 24hr jobs. (We did check into that! But.....things can change in four months, so no guarantees) There will be a few bars in small hamlets that one could get water from, so we haven't left you out there with nothing, but.....

The thing we are trying to stress here is this: Stop when you see an opportunity. Note where you are on the route in terms of mileage. Carry away what you'll need to go at least a 100 miles easily. Be smart! It is a "win" to finish. Going light and frying yourself by running short on food and water may be fast for awhile, but it will not play into a finish for you. Not from where I'm sitting, and I know the course.

Plan accordingly.
Posted by Guitar Ted at 1:00 AM

Mr. Stevenson, are you trying to scare the riders? Come on, it's IA, it's spring, the roads aren't even paved. How much trouble could people run into?

Touring we are touring!

@(Mr.) Apis: Well, they can not say I didn't warn them now, can they? And that sir, is the point of all of this rambling. It is what it is.

@ButchieCantaloupe: Can't wait to see ya'all again. (And come back to Nebraska for a ride as well)

Apis, most veterans of Trans Iowa understand what GT is saying. There will be newbies there that will get upset that there are not aid stations and gas stations every 25 miles.

The great thing about Iowa is that there is a farm house about every mile. Of course, riders should not rely on stopping at a farm house, but it certainly has happened before.

Iowa is like nothing one has seen before. The roads rattle your bike loose and Dura Ace derailleurs explode into pieces over the gravel. The Hills will break your spirit and you will need more food and water than you could have ever calculated.
Oh! I forgot the relentless dogs.
ari