More On The Beginnings Of The Modern 29"er: Part VI

It's winter, the "off-season", and I don't have much better to do than to delve back into this whole deal again. Today I wanted to talk a bit about the early days of the "modern 29"er" as I call it. (Yesterday's post:  Part V of this series, can be found here) 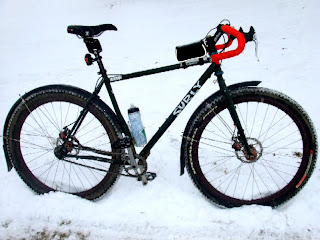 "The Early Days Of 29"ers": After the introduction of "The Tire", (WTB's Nanoraptor 29), a new era of  bicycling was unleashed. Not only could those who wanted a 700c based mountain bike now have a legitimate mountain bike tire on those old touring rims, but they could get an ever increasing amount of custom builders to make one for them. Many custom builders suddenly found themselves with several orders for this new type of mountain bike.

It might be argued that this ended up becoming a shot in the arm to the custom bike building craft and that things like the North American Handmade Bicycle Show, (NAHBS) maybe wouldn't have taken off without the influence of the 29"er. Certainly the lack of manufacturing 29"er brands early on matched up with the early desire for folks looking for something new and different which resulted in a lot of small builders getting very busy.

Perhaps it was a "perfect storm". The burgeoning internet forum activity also played into this phenomenon. In the 90's it was all magazine based information which was limited and mundane. By mid-decade a parade of wonky suspension designs and "NORBA" hard tails were all you would see every month. Now with the advent of relatively cheap PC's and the "world-wide web" available on a large scale, folks were circumventing the staid magazine editors and company marketing machines to find a bubbling, effervescent sub-culture going on, which included 29"ers and custom bike builders most of us had never heard about before. Put this volatile cocktail in a web based forum and you have what became "Mountain Bike Review" or "mtbr.com".

With a daily flow of news and development rumors flying, the 29"er enjoyed a small, cult following. Maybe things would have transitioned beyond this eventually, but the next "big" development in the evolution of the 29"er movement would certainly have to be the introduction of Surly's "Karate Monkey" model. Surly, a Minneapolis Minnesota based concern, was well known for being a player in the single speed movement. The introduction of the Karate Monkey at the 2002 Interbike trade show marked the first time North Americans were going to be able to "buy into" the 29"er movement without paying custom bike builder prices. The Surly site says this about the Karate Monkey:

"It didn’t create the 29er category, but it helped bring it to the masses and set the standard for what a 29er could be."

I'd go further and say that this model was copied by more manufacturers and custom builders than any other single 29"er ever made. To say that the Karate Monkey was "influential" would be an understatement. Now just about anyone with a little faith and about 800-1000 dollars could build up a sweet 29"er from the ground up. And what is more, the Karate Monkey actually, (and still does), ride quite well.

The Fisher Influence: Meanwhile, the Gary Fisher Bike company was plugging along, trying to make the 29"er thing work in the traditional bike shop category. Fisher was able to bring IRC tires into the 29"er tire market, and also managed to get Marzocchi to manufacture a couple of  suspension forks. That was all well and good, but the dealer network was having a hard time understanding the big wheeled oddities being pushed by their reps and even more shop employees had no idea what they were looking at. Times were tough at the retail level for 29"ers.

By late 2004, their was talk at Fisher/Trek of pulling the cord on the life support 29'ers were on. However; a new take on the big wheeled bikes actually saved the 29"er line, and it came in the form of "Dual Sport" bikes. Hearkening back to the original hybrid bikes of the early 90's, ironically, the Dual Sport bikes were more easily understood as hybrid bikes by shops and consumers. The Fisher company couldn't get enough of them out to dealers. By late 2007, 29"ers had entrenched themselves and were outselling 26"ers at Fisher. The tide had turned.

Fisher can also be credited with getting Rock Shox and Fox Shocks into the 29"er market, solidifying the category even further in the retail bicycle trade. Meanwhile, by 2006, more mainstream bike companies were jumping on board with 29"ers, and by 2010 it was easier to count those companies not making 29"ers than those that were. Gary Fisher Bikes had a big hand in making all that happen.

So it is that now, at the end of 2010, we have 29"ers coming from all sorts of companies in all sorts of forms. Accessory items like wheels, tires, and forks are readily available. Specific 29 inch designed stuff is commonplace now. All thanks to a few passionate individuals working the big wheeled idea for years before finally, "The Tire" was introduced and everything changed for big wheeled mountain biking afterward.

In my final post on the beginnings of the modern 29"er, I'll take a look at what it all means to me from a personal standpoint. Look for that tomorrow.
Posted by Guitar Ted at 1:00 AM

all I can say is I still love my KM with Nanoraptors after 5 years, tried other tires & still go back to the nano's or exi's. My KM is my go to bike kind of like an old cowboy always carrying a fencing pliers on him out here in western Nebraska (ya I did that to in those days!) you could say the KM is the "fencing pliers" of bikes!