More On The Beginnings Of The Modern 29"er: Part II

It's winter, the "off-season", and I don't have much better to do than to delve back into this whole deal again. I wanted to lay some groundwork as to the "pre-history" of the "modern 29"er" as I call it. If you want to see the post where this all started, go here.

Obviously, this "Part II" should come before the other. Oh well! I didn't have any intentions of writing a history lesson on 29"ers. However; now I have been hit with the bug to do it, I have had some contact with one of the main players in the story recently, and I have some major chunks of the story laying around anyway. Might as well, eh? 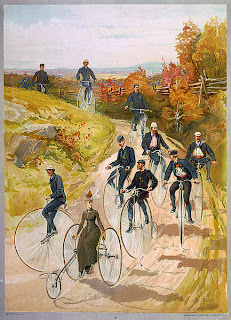 The Safety Bicycle: The whole story really goes back to the beginnings of the bicycle as we know it. Before wheels were of equal size, there was the big bicycle craze of the 80's. The 1880's, to be exact. Folks rode "ordinaries", or "penny farthings", as they were sometimes called. These were two wheeled vehicles whose "gearing" was determined only by wheel diameter. The drive was direct- no coasting unless you took your feet off the pedals- and they were driven by the enormous front wheel. A trailing wheel of much smaller diameter was generally the set up back then. It is interesting to make note that your wheel size was described in inches of diameter and also in "gear inches", which are one in the same. (See here) This will come into play later.

The bicycle of those days was a dangerous vehicle due to the design which placed the rider high in the air and which led to many a "header" where the rider would be pitched over the front of the bicycle after impacting an obstacle the wheel would not roll over. However; it should be noted that these enormous wheels rolled over stuff really well. Another point to put into our minds for later!

Soon a dash was on to reconfigure the bicycle into something "safer" to ride. The development of the chain, originally employed in tri-cycles of the day, was brought up to speed and employed by designers to eventually evolve the bicycle into the "safety" bicycle which was so-called due to the inherent difficulty a bicycle of same wheel sizing had in tipping forward over its front axle. Headers became a thing of the past, for the most part. The chain, with its two cogs, could be used to convert rider's energy into similar "gear inches" that ordinaries had. In order to figure out the gear inches, the practice of measuring the outer diameter of the rear drive wheel persisted. Eventually, "gear inches" became an esoteric term and was only used in track racing circles, for the most part. However, sizing a tire to a rim was still done by using the outer diameter method in inches, and this still persists to this day.

How The Old Ways Affect Us Today: One thing to keep in mind here is that the commonly held thought that the "inch diameter" designation refers to rims only is an erroneous one. It was always a measurement that combined the tire with the rim to get the designation. So, for instance, your rim diameter may be 22 inches or so, but put a two inch wide tire or so on that rim and you have a 26" diameter wheel. Mountain bikes are described as "26 inch" bikes, but this does not necessarily tell you the rim diameter. In fact, there are several "26 inch" wheel variants in existence. 650B is actually a 26" diameter variant, for example. It was only recently that when Kirk Pacenti introduced 2 inch wide 584 ISO bead diameter tires that the 650B/26" type wheel became 27.5". (The proponents of this wheel for mountain biking use have stuck with the "metric" designation for this wheel size for mountain biking, further confusing things, but that's another story.)

It is also interesting to note that early bicycle engineers were intent on keeping things as efficient and as comfortable for riders as possible. Nearly every design feature we enjoy today on bicycles was thought of back in the late 19th/early 20th centuries. Only a lack of materials technology and funding kept most of what we know today from becoming reality then. However; one thing was arrived at that will become an important part of this discussion. The 28" wheel.

The Original "Mountain Bikers": Of course, roads, (if there were any), and trails were very crude back then. Rough tracks were tamed by the old high wheeler's big wheel diameters, but when the safety took over, wheel size was a grab bag of different ideas as to what would be best. It ended up being a nominally 28 inch diameter with approximately 1 1/2" wide tires and whatever rim diameter worked with the particular tire design used. Eventually, what shook out was what we have come to know as "700c". At any rate, these early cyclists were enjoying the biggest, easiest rolling wheel size they could ride on a safety bike with fairly voluminous tires which gave them comfort and control on the rough roads and unpaved by-ways most common in that time. Some folks point to these folks and the bicycles they rode as the earliest "mountain bikers" and the earliest "29"ers". However; in the modern definition of both mountain biking and 29"ers, it is evident that what they were doing and what they were using can only be seen as prototypes for what came afterward.

Now, fast forwarding a bit: Roads got better, so "big" volume tires were not as necessary. This evolved to the point that by the late 1980's, road bikes were flirting with 18mm wide tires. Now that has backed off to the most commonly found size of 700 X 23mm and 700 X 25mm for paved road bicycles. At the time when the Marin Gang and the other NorCal off roaders were looking for something to use off pavement, the 700c based wheels were just not even on the radar, due to the lack of tire options that would allow for proper dirt usage. Not that the idea wasn't dreamt of, because it was, but tires didn't exist then, nor frames to put them in that would accept a wider tire on a wheel bigger in diameter. However; Arnold Schwinn's "ballooners" originally designed for juveniles, was around, and relatively easy to put to off road use. Thus the 26"/559ISO size became the de facto mountain bike wheel size out of convenience.

Next: The quest for "alternative wheel sizes" begins.....
Posted by Guitar Ted at 1:00 AM

That graphic makes me feel the need for tweed

@d.p.: Wait till ya see one I have in store coming up in the next post on this! Tweed stuff would be fun. And of course, then you could have the Tweed Ride thing.