Gravel Mutt- A Closer Look At The Beast 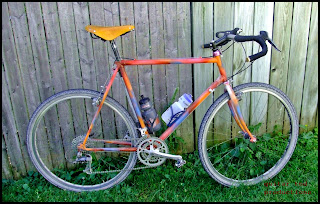 Today I wanted to go over some things on my Gravel Mutt and maybe give folks an idea about why I feel certain things could be better, while certain things about this bike are pretty spot on. So, let's dive right in....

First of all, let me repeat for the skeptics out there that I feel any bike can be a gravel bike. It is just that some things will work well, some won't, and I have an opinion on that. Whatever bike you choose to gravel ride with is fine by me, but this is what I personally don't like, do like, and is based upon observations by myself, other riders, and experiences of mine and other riders I know. Your mileage may vary.....

Okay, with that non-sense out of the way, here's the deal- The Gravel Mutt rides "okay". It has some cool thing and some not so cool things. First, the good stuff.... 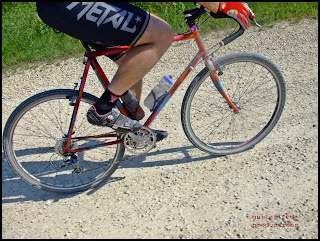 Okay, the balance sheet looks mostly positive, right? Well, that bottom bracket height is something that does make a difference in handling. When you get in the marbles, the bike's, (and subsequently the rider's),  higher center of gravity pivots around an axis laterally that is unnerving at speed. The tires start dancing around and it has a very different attitude than my BMC does in similar situations. In fact, I can run smaller tires on the BMC and get a more secure feeling than the Mutt doles out. The Gravel Mutt tends to want to push the front tire off line in these situations as well, only adding to the feeling of instability.

I don't know what speeds a cyclo cross bike reaches on courses those bikes are designed for, but regularly going 25-35mph on loose gravel? (Or faster many times.) I would be surprised if that was in the gene pool for a cyclo cross design. Those bikes have higher bottom brackets for a reason, and road racing bikes have lower bottom brackets for a reason. I would submit that a gravel road calls out for a more road bike-like geometry, and the Gravel Mutt points that way, from my viewpoint.

In fact, knowing what I know now, I would not have taken the Mutt to the GTDRI. Those hills were steep, fast, curvy, and the really high bottom bracket on the Mutt would have been a bigger handful than they were on the BMC. It's good for the flats and tamer hills, but give me a lower bottom bracket for the fast, steep hills any day.
Posted by Guitar Ted at 1:30 AM

I wonder if that slacker head angle is working against you, and what you're feeling is a little bit of wheel flop as the front end shifts around.

@Marc Pfister: My BMC has the same head angle and I see no similar issues as I do with the Gravel Mutt, so I would say that "no", the head angle is not the culprit here. In fact, it really doesn't have "flop", in the way you might think.

So why not start with a road frame?

I've got a gravel mutt, although we refer to it as a fugly fraken-rando. I started with an early 80's lugged-steel Medici Pro Strada (road bike), dimpled the chainstays a bit, threw in some 650b wheels and long reach brakes.

I know you aren't a 650b guy, but it makes a lot of sense for a gravel mutt. Road geometry with fat and fast tires.

Here is a photo of the bike and buddy's bikes from a gravel ride yesterday.
http://www.flickr.com/photos/scottsnelling/9412627209/
I had three rocks go pinging off my downtube pretty hard. No stress, cause it is just a fugly fraken-rando.

@s.s.: Mainly because the road bikes that would work have caliper brakes which do not allow for enough mud clearances, not to mention the frame. Essentially, what makes a great gravel bike is cyclo cros bike barkes, (canti or disc, I don't care that much), cyclo cross bike type clearances for 40mm+ tires, and road bike geometry.

Even if your bottom bracket is 1.5" higher than it should be, that changes the lever arm around your center of gravity (we'll say it's 40") by about 4%.

I'm amazed the bottom bracket is so high - the specs say 11.5" and that seems just crazy. Maybe there's a 650b conversion in this bike's future?

@Marc Pfister: all I know is what my iPhone angle finder and my tape measure tells me. ;>)

Hey gt, I know this donkey's old, but I have a 1990 trek 520 that is a 17 inch frame that has 11.6 bottom bracket height, 70.5 head tube and 73.0 seat tube angle. Uniquely, it was a warranty frame I bought from trek, so never built up originally as a complete bike. Even more unique is that it was built of true temper quad butted tubing! I have experienced the same bb height issues as you. Due to my leg length, anything I've a 32c tyre gets touchy, if you know what I mean. It has a complete campagnolo veloce 10 speed kit, with fulcrum wheels. At present I am considering going to 650b as it has a 135mm back end with lots of clearance. My other bike is a giant anyroad comax, by the by. Love reading your writing, as I'm an American resident in the uk! Keep up the great work and writing!!

@RealPro1: Thanks for the back story on your bikes. Thanks even more for reading! Cheers!