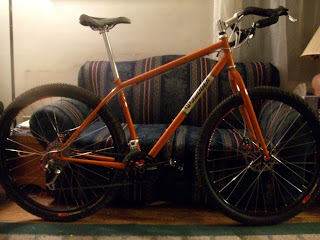 <===Just a quick photo before running off to bed!

Well I thought I'd never see this day. The day I finished the Badger. Almost hard to believe, really, but there it is.

A bike that began almost a year ago with a phone call from Rob Pennell. (Yes! He called me!) The process of getting the frame wasn't too bad, even when you factor in the troubles that Rob had last year, I still got this in a fairly timely fashion. (As a side note, I know some folks have had trouble, and I truly feel bad about that.) Really though, with having another custom frame/fork build going on simultaneously to this bike, I couldn't afford doing both. The Badger had to wait. The decisions on how to kit it out had to be agonized over. (Shifters were the primary source of head scratching.) I had to resolve to having this be a long, drawn out affair.

Before going any further, I've got to thank a few folks here. These folks made it easier on me than it should have been. First, Rob Pennell, who started this whole thing out by offering me a killer deal on an awesome custom frame. David Pals, who got me hooked up with the Thomson stem, seat post, and some clipless pedals. ( The pedals are on my Pofahl. ) Jeff Kerkove, who got me hooked up with the saddle. Brent Gale, who hooked me up with the cranks and hubs. Finally, George Wissell, who hooked me up with the rest of the wheel components and the actual wheel build. You guys were all too kind, and I couldn't have done this without you. Thanks!

Maiden voyage planned for this weekend. I'll get some better pics, and I'll detail out the whole bike then.

And Now- For Something Completely Different.... Twin Six is having a "Spring- (Sort Of) Sale". Here are the details and some info on a charity you might consider as well:

The sale starts Thursday 1/31 and ends Sunday 2/3. Get while the gettin’s good.

Jenny's Light: Twin Six recently lost a dear friend, Jennifer Gibbs Bankston, and her son Graham, to postpartum depression. Jennifer was a joyful spirit who was loved by family and friends with the same intensity that she showed in her love for others. We have been friends with her and her family for over 20 years, and we will always remember her for the bright light that she was.

10% of all sales from our T6 Spring Sale will be donated to Jenny's Light, a newly formed nonprofit foundation dedicated to building awareness, detection and treatment for postpartum disorders.

Donations can also be sent to: Jenny's Light

Time To Ride?: Warmer weather is on the way. (Well.....a lot warmer than it has been!) I'm hittin' the gravel this weekend. Hope you can find some time and a place to ride this weekend too. Take care, and ride that bicycle!