Fun, Run, And a Big Whoops! 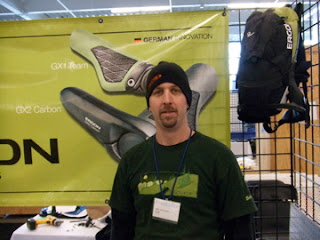 Frostbike 2008 started out with Carlos picking me up and starting our journey to the Twin Cities by way of Milltown Cycles. Ben Witt got Carlos on a 36"er, which he said later had him grinning from ear to ear after about two pedal strokes. (I told ya so, Carlos!)

Then we hit up a Home Despot, got some supplies, hauled in all the goods at "Q", and set up the booth. I snapped this quick pic of Carlos before I was whisked away by Jason Boucher of Salsa Cycles to tag along with him for the evening. 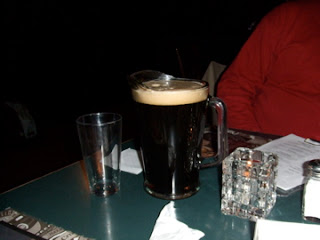 After a little happy hour gathering, (Approximately 200 folks jammed into a room that should have held about a 100.), we went to some place in Minneapolis called Seven Corners and hit up this micro-brewery/restaurant joint that served up this awesome coffee porter. Yumm...........black goodness and beer.......together! 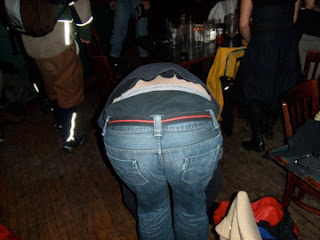 The room was filled with folks and our party consisted of several folks from Surly, Salsa, QBP, and various international dealers from Germany and Japan. Some magazine writers from Japan, Canada, and this lowly scribe were there representing the media. Well, after several beers and hijinx that can't be repeated on this blog, one of the Surly crew got up and gave this poor Salsa engineer a snuggy. Unfazed, he threw down his jeans right there in the restaurant, pulled his grundies from outta you know where, and zippered back up, much to the delight of our female guests. 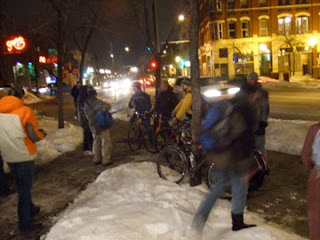 We then all piled outside to the street where the Japanese journalists were doing a photo shoot with Jason and Mike Reimer of Salsa. The Surly guys were all saddling up to go to One on One, which is a bike shop/coffe shop/gathering place for the Twin Cities cycling cognescenti. It was decided by the Japanese that they should also proceed to ride with Jason and Mike in tow, while shooting photos along the way. That meant that I was in charge of driving Jason's vehicle to On on One. Well, that's when the Big Whoops happened! 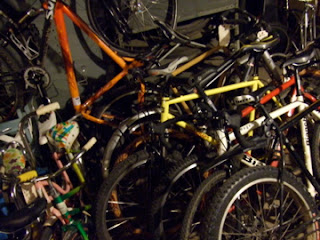 Proving that I am just a rustic, podunk Iowegian, I proceeded to park Jason's car in a tow zone. Yep, you guessed it! $226.00 dollars cash later, Jason was able to get his car out of hock while I shamefully skulked about One On One, trying to dodge the sideways glances of those that were chatting about my dumb move. I decided to check out the legendary junk room in the basement where I would go unnoticed while Jason got his rig back. You gotta check this place out if you ever go to the Twin Cities. This pile I have pictured has a Soulcraft 29"er, a Dos Niner, a Karate Monkey, and a 1 x 1 snow bike rig all together in a knot with other bikes. Amazing!
Everything was for sale, unless otherwise marked. It is just a small chunk of what must be thousands of bikes piled up in this basement cavern.

After Jason retrieved his rig, we split for his place. I gotta say, Jason is one fine man and was very decent to me considering the circumstances. I should have been left outside to sleep in the garage, but he was a much bigger man about it than I probably would have been. Thanks Jason for being so kind. I can't ever repay you that!

So, after a quick nights sleep, we got up, flew over to the "Q" and started in on the show. It's afternoon here now, and more is to come. Well, that is if I don't do anything stupid again!

I might have to walk home if I can't reign it in tonight and be smart!

Tune in tomorrow to see how I do!
Posted by Guitar Ted at 2:03 PM