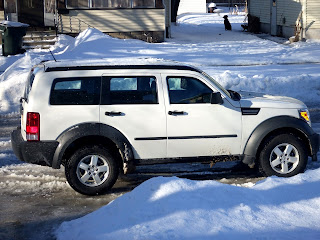 <===Rental vehicle: The Dodge Nitro Command Module
We are getting the family rig repaired at the local body shop after my disasterous encounter with a 3/4 ton pickup/snow plow rig. We had to get a rental in the mean time and looky at what they brought over. If this thing doesn't look like a military vehicle dressed as a civilian, I don't know what does. It reminds me of some of those old German WWII vehicles in a weird sort of way.
At any rate, it's a good thing it is what it is, because the streets here are horrendous. I've driven on smoother plowed fields.......seriously!
The Iceman Cameth, Now Needeth To Depart!: The streets are so slick and so rough that I believe it is nigh unto impossible to ride a bicycle down them. That said, I'm riding to work today, so I'll report back later. One good thing that I saw was that the city decided to dispatch road graders to try to scrape down the bigger "ice moguls" out there. I checked after one went by the house here and it was somewhat effective, but it still looks pretty bad. The good news is that it is supposed to warm up over the weekend, so this terrible situation with the streets should at least be rectified. Of course, that will only make the potholes worse, but I digress..........
Riding Outside? Well, the whole theory of riding outside actually makes sense. That's great that some of you actually get to do it out there. Even I get to squeeze in a ride now and then out doors. The fortunes of some folks are not so good though. I got a e-mail the other day pointing me to a blog of a newly added T.I.V4 participant. He was joking about getting busy now and training. The picture he posted told the story well: Back door open with bike shoved into a three foot pile of snow immediately outside of said door. Ouch! Yeah.......some places do have it worse than we do here!
Rubbery Goodness: Got word yesterday that Twenty Nine Inches will be getting some Continental Mountain King 2.4" tires to test soon. I have heard mixed reviews from folks on these, but we will give them the thorough going over here and see for ourselves. I'm thinking real dirt riding will commence in about two weeks. So let's hope that I'm right and I can get these tires dirty, not to mention other projects here and on the radar!
Stay tuned!
Posted by Guitar Ted at 6:57 AM