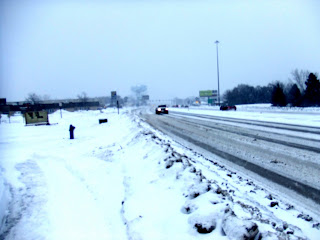 <===This is getting to be a regular thing 'round these parts!

I decided to take the KMFDM out for my commute yesterday to get a feel for this fixed gear thing. I was able to start early since my daughter has extended learning on Thursdays which meant that I was out about 45 minutes earlier than usual. I figured it would give me plenty of time to get used to the fixed thing and to walk the sketchy icy sections. Well, there was one thing I didn't figure on. That was a flat tire! About a mile into it I felt the back tire go soft. Ahh.........crap! Then it all dawned on me. You know how your mind works sometimes? Like when the realization that your keys are on the dresser as your front door lock snicks shut? Yeah, it was like that as I realized that I had no 15mm wrench in my bag and I had taken the pump outta there for some reason awhile back too. Brilliant! I rectified both problems later, but for the moment I was left to walk it. Good thing I had an extra 45 mimutes, huh? Yeah, 'cause I used them all and got to work right at the buzzer! 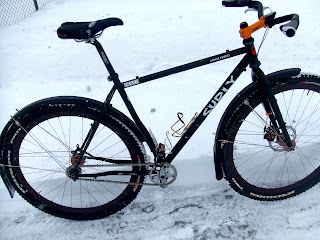 So, not much to say about fixed gear at that point, but I had redemption waiting in the form of the commute home. The thing was, it had started snowing. A hard, icy, wind driven snow. Yes........I was facing the wind most of the way home. Character building commuting is becoming a speciality here, I guess.

At any rate, the KMFMD did great and I had fun on it. To be sure, I didn't go very fast! Well, even with a freewheel I would have gone slower. The ice under the granular snow was a real treat, let me tell ya! The Specialized Fast Traks did all right by me and I was able to keep the rear wheel underneath me for the most part. The hardest thing was having to keep pedaling over the sheer ice sections. Normally I freeze up and coast those. No can do on the KMFDM. 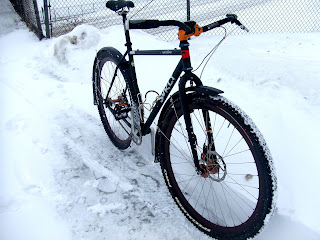 About a mile from the house I got a call from my wife and she agreed to pick up my daughter instead of me. Cool! Long way home time! I got to go up washington Park hill this way which was all snow over ice. I had the rear wheel slipping out and the back end coming around a few times, but I got up it with no problem other than that. Oh yeah! Popped my first fixie wheelie to get up over the curb there too. Hmm.......maybe this isn't as bad as I was thinking it would be. 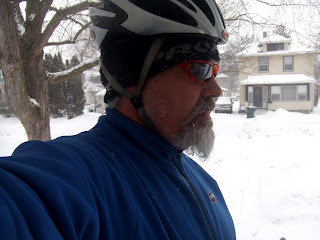 <===Seriously stiff beard ice going on in there. Trust me on that.

Well, I finally made it home and by the time I got there I was cruising along at a comfortable speed. I figured out the no coasting clause and I was pretty much at peace with the machine by the time I rolled up to the house. Here are some other things of note too........

Space Bar: This thing is cheap, ($25.00), has a great sweep, and for the KMFDM has the perfect rise to get me in a relaxed riding posistion.

Avid BB-7 brake: Again, I don't know what Avid/SRAM did for '08, but they made the mechanical brake line cheaper and quieter in operation. The brake sqealed a bit once on my commute. Older versions of this brake would howl anytime they got wet. This is my third set with '08 brakes, so I don't think it's a fluke.

Ergon grips: I have the basic model on the KMFDM with the Space Bar and they are awesome as ever. I always marvel at how well my hands do with Ergon grips. They fit and perform just peachy on the highly swept Space Bar too. They might even be better on a bar like this than a straighter, more traditional bar in my opinion.

Narrow rims for 29"ers: Well, so far the narrow Deep V Velocity rims are fine. Gotta remember to run slightly higher pressures in the tires with these though. I think that's what caused the flat I had as the base of the valve stem tore due to the narrow rim well and low pressure I had going on earlier yesterday. I beefed up the pressure for the ride home and no worries so far.

Okay, I hope you all have a safe happy weekend. Ride yer bikes!
Posted by Guitar Ted at 6:58 AM