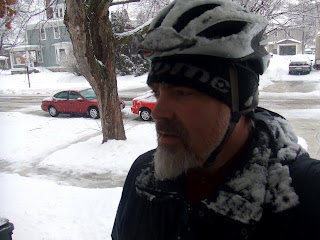 <===Plastered with the white stuff.

Well, this storm that we just had was quite a treat, let me tell ya. First off, we got a layer of freezing fog in the morning which made for one of the most treacherous bike commutes I have ever had. It took me 45 minutes to do what normally takes 20 minutes. I had to go that slowly. Then it started to rain while I was at work. I mean it rained hard! Of course, since there was no where for the rain to go because of all the ice and snow, it puddled up into huge lakes and ponds all over the city streets.
The weather then turned the rain into huge wet snow flakes. It almost looked as if clumps of snow were coming down instead of individual snow flakes. This began to accumulate, so since we were so busy at work ( ha ha) I asked to get out of there early so I could get home before things got totally out of control. (The weather folks were calling for around seven inches of snow at the time) 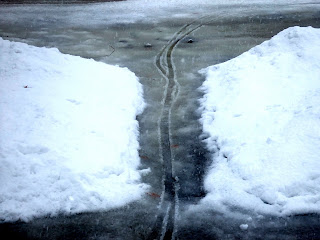 Well the commute home was a dandy. Wet snow was sticking to me and I started to think about that ride that Andy Hampsten put in over the Passo Gavia in the '88 Giro. I couldn't help but think of him with those Oakley Pilots all plastered with snow and the way his rig was leaving tracks in the freshly fallen snow. I rode a section of bike path on the way home that no one had been on all day, ( mostly because anybody in there right mind wouldn't have been riding or walking that day!) and I turned around to see my tire tracks in the wet slushy snow. Yep! Just like Andy's, only wider! (29"er tires, of course) Here's a shot of the walk way up to my house to give you somewhat of an idea of what I saw out there. I wasn't about to stop for photos until I got home due to the super wet snow coming down. 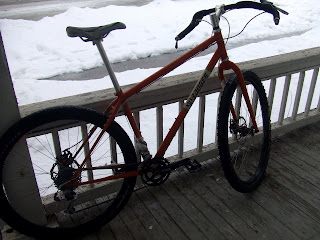 The Badger did great over the super rough streets where the rain ate holes into the snow cover. That made the streets rough because the holes and ruts were like four to five inches deep and filled with slushy water, of course. Some intersections had water over six or seven inches deep.

Sure, the Badger is a new bike and it was expensive but it is a bike, ya know? It is supposed to be ridden and I figured why not today. It's got frame saver in the pipes and it is a mountain bike, after all. I found out that it handles the rough stuff well and it was a very stable ride in the icy mornings edition of my commute. Anyway, I'm not saving her for sunny days. That's for sure!

So I made it home safely and the threats of deep snow never materialized. All is good. The ride was fun, and remembering that famous ride of Andy's was a good memory that made it even more fun. Not that I am comparing my little commute with that epic ride, but you know........it was a little inspiration. That's always a good thing when the conditions suck!
Posted by Guitar Ted at 6:37 AM