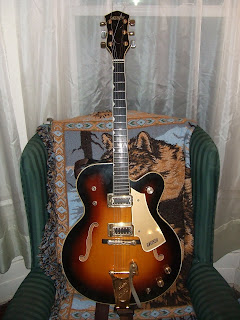 <===1972 Gretsch, unknown model. The axe of choice for this past weekends church gig.

This blog started out with a promise of some guitar content, but it has been sorely missing. I decided to throw up a pic of the ol' Gretsch for good measure. Don't let it's "jazz box" looks fool you. This lil' devil can rock with the best of 'em. A bit prone to feedback, perhaps, but that's part of the fun for me. I kinda like feedback! Interesting note: It may be a hollow body git-box, but it's the heaviest guitar I own. Any who..................

I didn't venture out into the artic blast this weekend on two wheels as it would have been a futile attempt at staying upright besides the dangerous wind chills. The wind was incredibly strong all day Sunday and most of Saturday afternoon too. I got a few projects around the house done, got the Badger "tubed" so I can actually ride the dang thing, and took in the NAHBS coverage on the innerweb.

Speaking of NAHBS: That show is an exercise in showmanship more than anything else. It's gone too far in my opinion. Look at the rigs. How many of the ones that garnered all the media attention are actually functional? I mean day to day functional. Some of the stuff I saw looked downright scary to ride what with things poking out here and there. It's almost a sculpture exhibition that features pieces that just happen to have two wheels and a set of cranks. Not so much a bicycle show, not like it was three years ago. It will be interesting to see what happens now as the show is to be in Indianapolis next year. Not a cycling mecca like Portland, so perhaps the show will have a very different feel. We'll see. 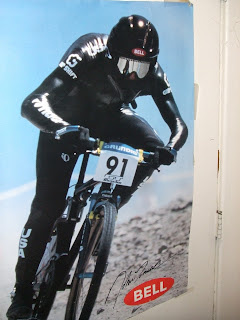 This is the poster on the door leading to Guitar Ted Labratories. This little gem was at the first shop I worked at. That shop got it as part of Bell Sports helmet promotions. They let me have it later.

This is the epitomy of "rock star' in the bike world for me. John Tomac, the quiet, unassuming guy who rather fancies himself as a cowboy these days was at the height of his powers here in the early 90's. I remember when this shot hit the mags. We all thought that down hilling had hit a new high. The bar had been raised. A freakin' skin suit? And that helmet! Nothing had been seen like it before, and nothing has since. Tomac re-invented himself yet again, and this was the most stunning edition of the "Tomes" to ever take the trail.

Today's down hillers can't even begin to approach the aura sent out across the mountain biking world that this image did. It was a fun time to be in the sport, and I will always admire Tomac and his skills as a mountain biker. The guy is still rippin' too. Amazing!
Posted by Guitar Ted at 6:56 AM