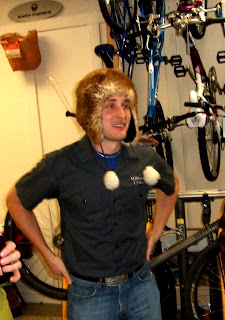 The big deal of my past weekend was going up to Faribault, Minnesota for the "Mukluk Release/Welcome Winter Party" put on at Milltown Cycles by Ben Witt and a fine supporting cast including his mechanic, Curtis, and various family and friends of Ben's. Let me just say up front, it was a fine time, done up quite well, and was very well attended.

Okay, so just what was the deal? Well, obviously, it was about doing just the opposite of what most bicycle shops in this area do about now. That is "welcoming winter". Just when most bicycle shops are about to lay low till Christmas, or until Spring, here we have Milltown Cycles throwing down a big party instead to welcome winter! Yep. And why not when you have a bunch of fat bikes around to sell...... 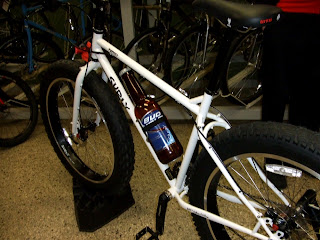 <===Improper use of an Everything Cage, offense, penalty, five yards. Repeat first down!

There were fat bikes there though, of course. They were all customer's bikes, or bikes belonging to folks from the area. Besides the, (not one, but...), two Nerstrand hams, various hot dishes, and cakes available to eat, along with loads of real beer, there was a snow ride planned. so, several fellows brought out the fat and rode a bit in the early evening. Those who weren't riding in the 9 inches of fresh snow at single digit temps were inside eating, drinking, and making merry. 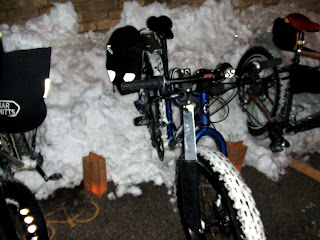 Outside Ben had the help place luminaries in front and in back of the shop. After the snow ride, we hung out in the back while an oak fed fire blazed away in the dark, cold night, keeping warm fingers and toes. We admired the snow rigs and actually, one Mukluk.

It was one of the half dozen that have gone through Milltown Cycles already, and belonged to an area resident who had a custom machete holster attachment on the Enabler Fork. Hmm..."Don't Mess With Minnesota"! 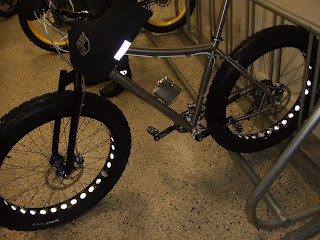 Following are some images I shot at the party..... 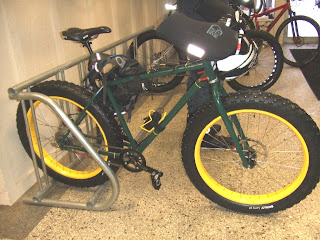 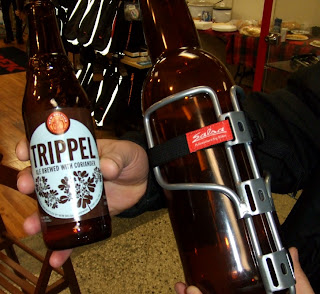 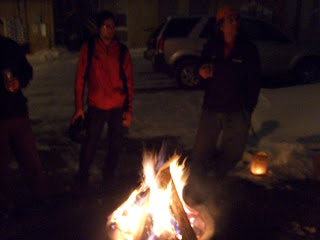 <====Hanging out around the fire out back. 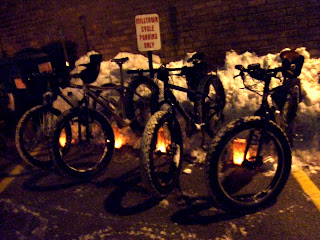 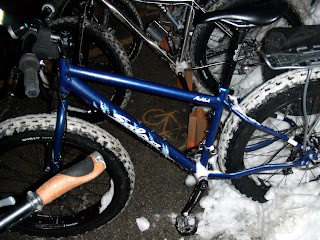 It was a very well attended party and everyone had a great time. I got to see some of my regional friends and hang out for a bit with them, while meeting some newer folks as well.

The next day I had a wonderful breakfast with Ben, his wonderful wife, and Marty Larson of the Prairie Peddaler. Then I picked up a few things at Ben's shop. Tomorrow, I'll show you.......
Posted by Guitar Ted at 1:00 AM

Sounds like a FUN time was had,Old friend. Did you get my email yet?

Thanks for sharing!!! I kind of wanted to go, but I decided to go camping instead.

that machete must of been for zombie heavy commutes... toodles

@RD: Well, that's one commute I'll beg off from then!

I can autograph that for you sometime too... good times this weekend!

Incredibly that's not the first machete scabbard I've seen strapped to a fork. I can think of two others.

Looks like a good time. I should have gone up with the Pugsley.

@John: Likewise! Hope to see you again soon, my friend!

@Matt Maxwell: We had a guy that used to tote a machete in a messenger bag, but that was the first I'd seen of one mounted to a bicycle.