I had been planning on a big ride for quite some time. I wrote about the route here before, calling it "The Tour of Black Hawk County". That was back in July, but those plans had to be put on hold when I decided I needed to focus in on Gravel Worlds preparations.

Of course, I would need to recover from the 116 miles I got in at Gravel Worlds, so I planned on maybe getting at this ToBHC idea in a couple of weeks after that. But things didn't pan out for me to get to the route until this past weekend when everything came together for an attempt. I also decided that this would be my "GTDR" for the year. (Guitar Ted Death Ride)

When I say "everything came together" to get this done, I mean that. In the sense of getting the time away from the family, which was foremost of the things I needed to have happen, and in the sense of some testing for RidingGravel.com as well. Then there was the weather. Leading up to last weekend the forecast looked great. Not too hot, decent winds, and most importantly - no rain. So about a week and a half ago I pulled the trigger on September 18th as being the target date for the GTDR/ToBHC ride.

I was excited. I really had been looking forward to getting this route done for a long time and I had a certain disquiet in my soul over not having gotten around to it in July and August. But I suppose that only forged my resolve deeper and stronger for actually getting the entire route completed. I am thankful for that, because, as you will see, it took everything I had to make the day a success.

As the day approached, I made final preparations. I was going to take the Noble Bikes GX5 and a couple of test items for Riding Gravel showed up in time to get installed on the bike. Then I looked at the weather. What?!! The low temperature at around the time I wanted to get going was to be 40 degrees?!! It hadn't been that cold for months! But to compound matters, the temperature was to rise up into the low 80's by afternoon. Wow! Did that ever change my plans for what I was going to wear! I would need to ward off early morning cold and be prepared for Summer-like afternoon temperatures!

With all of that lead-up to this 'event', I did the best I could and I set a start time of 6:00am, which meant I would need lights for the first hour of the ride. My goal was to finish by 5:00pm or sooner. So, with all of that, I set the alarm for 5:00am and laid my clothes out the night before so I could vamoose as soon as possible the next morning.

I ate a small breakfast and got going early as I ended up waking up at 4:40am instead. I made it to my starting point, which was the City Park in Janesville, Iowa, at the Northwestern end of Black Hawk County. The plan was to take the county line road East, and in this way I figured that I would get a treat of watching the Sun rise.

There is something about getting up and starting a ride before dawn that I love. I don't do this enough, but I was sure glad I did for this ride because the morning was about as perfect as one could ask for visually. Not a cloud in sight, no wind at all, and the only 'bad' thing was how cold it was. It was really cold! I barely had enough on and riding hard would be the only way I would get warmth in the body. The County maintainer made sure I had plenty of adversity to force me to ride hard too, because the opening miles were on deep, fresh gravel. It was really tough sledding in the dark.

The roads were tough. I had a big problem finding any line, and this loose, deep gravel was really working my legs. Fortunately, as I said, there was zero wind to contend with at this point. Had there been any wind at all, especially a headwind of some sort, I would have been in deep trouble as far as finishing the route. I had to burn a lot of matches just to keep up an average speed which would get me to Janesville again by 5:00pm.

By the time the Sun had come up I was working the Northerly bits and was now getting closer to the Northeastern reaches of the county. Finally the roads out here relented with the fresh stuff and I was starting to find some good lines. The route had gone pretty much straight East by this point with only one turn South of a mile, then off Eastward again. Now I would find myself on some pavement for a bit as I worked around the disruptions to "The Grid" caused by the Wapsipinnicon River. 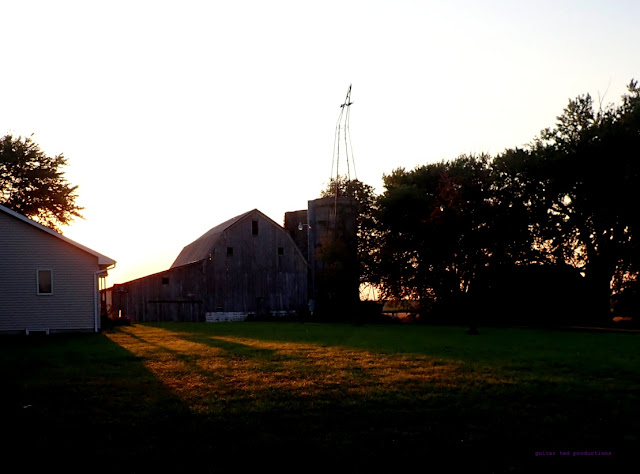 After a slow-ish start, due to the fresh, deep gravel, I was starting to gain some 'time-in-the-bank' towards my goal of finishing by 5:00pm. I had no computer on my bike, by the way, since my GPS has been smashed. So, I was navigating by my cue sheets I had made and paying attention to the signs on the corners. I knew the roads well enough from having done "The Quest" last year, so mileage to turns wasn't all that important. I did have mileage listed on the cues though, so I could mark my progress against time, which I had available via the Apple Watch on my wrist.

Finally I started moving South, as I had reached, pretty much, the far Northeastern corner of Black Hawk County. One side of the county was done! Now onward.......

Tomorrow: Part two of my GTDR/ToBHC

Congrats on such a fine ride!

That morning blush with your bike lying there lighting up the gravel in the foreground is a great shot ! Those sunrise, sunset pictures when traveling east or west during the vernal, autumnal equinox time of year can be difficult though. So is driving at those times of day.

@baric - That's an excellent point about driving conditions. I was keenly aware of that as I rode that morning knowing I would be almost invisible to drivers heading East. That is why I kept my rear flasher on until well into the morning. And thanks for the comments on my image. I was really pleased with the way it came out.

I wonder if I could do the same in my county? Rural MI, lots of gravel here...

Sunday's post comes up with this warning for me "Sorry, the page you were looking for in this blog does not exist."

Anyone else having issue seeing it yesterday?

@teamdarb - There has been a technical error due to my double posting Trans Iowa Stories by mistake on Sunday. So, I have pushed what would have been the 9/19/21 post to next weekend 9/26/21 You will get a double helping of Trans Iowa Stories then.

Sorry for any inconveniences this may have caused.